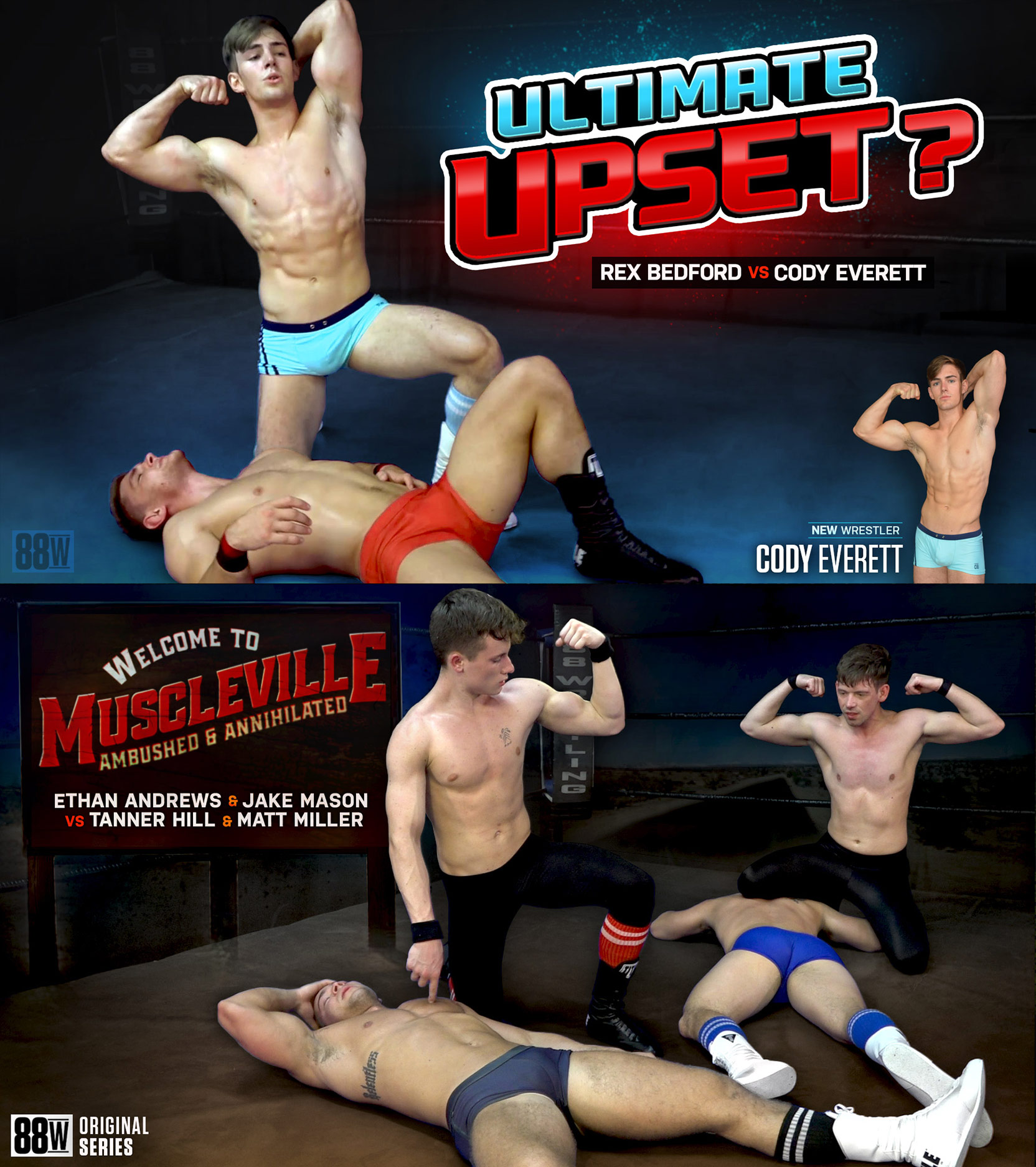 Today not only marks the debut of a fantastic and exclusive new wrestler on the 88W roster, but also a phenomenal match up! Cody Everett brings his trifecta to the ring; an outstanding teen physique, model looks, and a wealth of amateur wrestling achievements! His buddy Jett encouraged him to make the trip to sunny Florida knowing this kid has talent. Cody stands in his corner ready for this match and slowly peels his blue warm-up jacket off his hot bod to reveal he’s got it all; massive biceps, shredded abs, and huge quads all wrapped up in a sensational aesthetic physique. Some might say this rookie has looks as sweet as candy! Right away, you see it in his eyes he’s not intimidated by today’s opponent. He could care less Rex Bedford is the reigning King of the Ring, he’s focused on beating him down and taking him out. Meanwhile, Rex seems incredulous that he’s even in the ring with a rookie! He almost seems amused by this match. They tie up to start the action with Rex gaining the early upper hand. He breaks the rookie in with some rope punishment, a back-breaking Boston crab, then bending him backwards in a test of strength. But the teen muscle stud is no pushover and he turns the tables with a speedy double leg takedown. His next move shows he means business, he shoves his boot hard into Rex’s crotch and the King doesn’t like that one bit. Will this rookie firecracker explode and pull off the ultimate upset in his debut match? Or, will Rex dispose of another one of the opponents in line trying to get a shot at his belt?

Earlier this week Ethan Andrews asked Jake Mason if he would be up for a training session on Saturday. Jake didn’t hesitate and jumped at the opportunity. You see Ethan’s seen some of Jake’s matches and thinks the kid has some good potential. The punisher is in the market for a tag team partner, especially after hearing a rumor going around that 88W might be crowning tag team champions at some point in the future, and Ethan’s starving for a belt! The guys meet up at the 88th Street Gym only to walk into a surprise, the spectacular bodybuilder Tanner Hill and the ultra-popular high school jock Matt Miller are busy pumping up their muscles in the ring. Of course, there’s some smack talk between the four studs, and what follows is no surprise. But quickly it becomes a surprise to Team Tanner/Matt! Ethan’s been looking forward to another encounter with Tanner, mostly because the fun he had owning and trashing the blond bodybuilder’s perfect muscles in their Orange is Not the New Black match. The punisher enjoyed every minute of that beatdown! Jake has also been looking for an opening to gain revenge on rival school jock Matt after he felt he was cheated out of a victory in their All American Clash match. This is the perfect situation for Team Ethan/Jake, and not so much for Team Tanner/Matt. Ethan begins round 1 against Tanner and instantly attacks the muscleboy’s perfect abs. Next Ethan and Jake score by double-teaming Tanner with a stretching surfboard as cries out for help. Matt flies into the ring and breaks it up, but will they be able to turn the tide on their foes? A lot of thrilling double-teaming leads up to an awesome Double Demon submission finisher that has two of these sexy studs screaming out their shaming submissions!