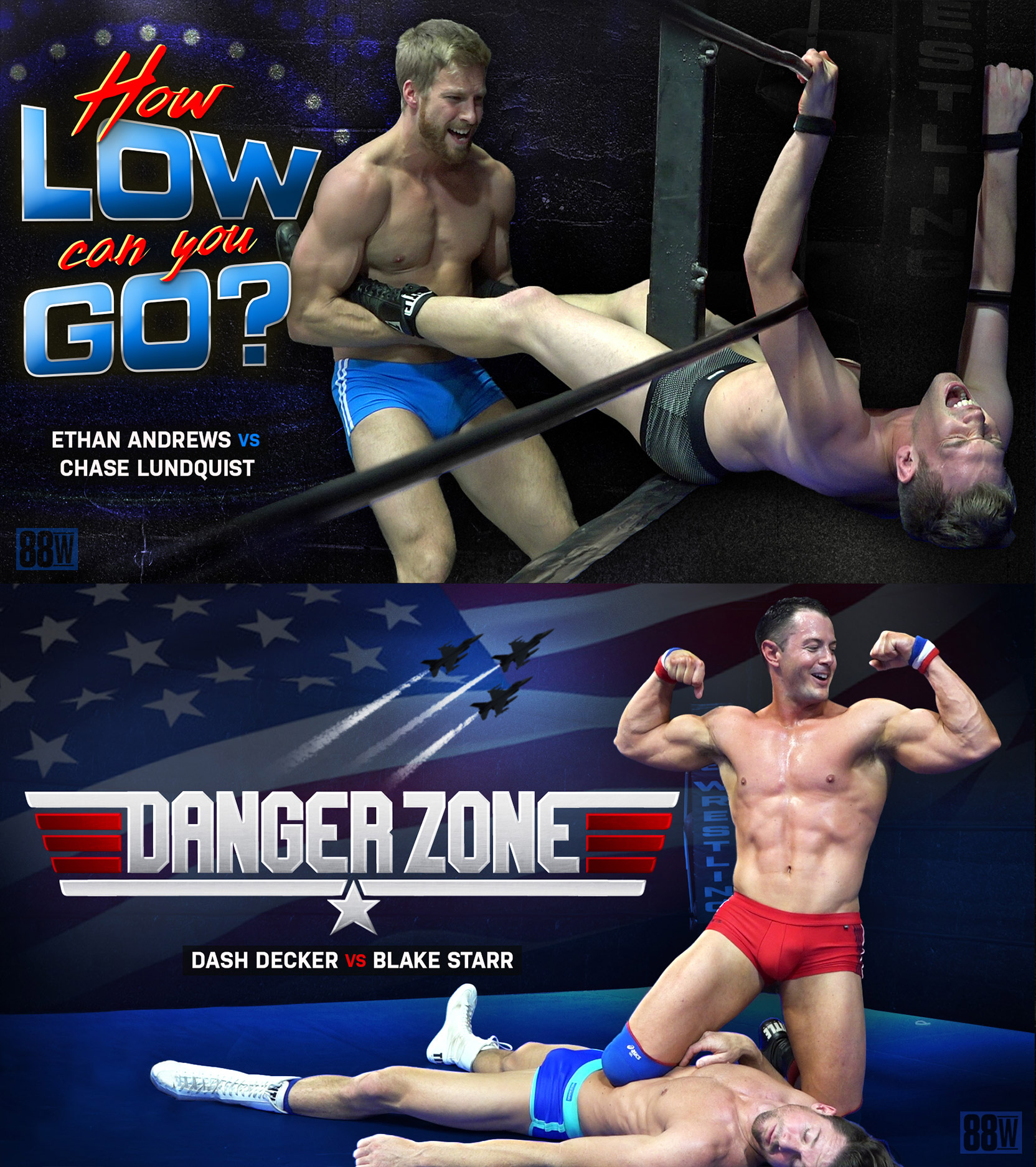 Today is the day Chase Lundquist has been waiting for, another shot at The Punisher Ethan Andrews. Years ago when Chase was a rookie starting out with 88W he was matched against Ethan in an Absolute Destruction match. The theme of these matches is of course to destroy your opponent’s abs until they can’t take it anymore and beg for it to stop. Well as you would expect Ethan did just that to the rookie, he pounded, kicked, clawed and punished the muscleboy’s abs into ultimate submission. Ethan owned Chase’s abs that day and he enjoyed every minute of that beating. Which brings us to today’s much-anticipated rematch. The blond muscleboy is waiting in the ring stretching his lean, hard, perfectly aesthetic body out in preparation for payback. He’s much more experienced and confident now compared to his early days. The Punisher’s been on a roll since his KOTR 2 loss to Rex, chalking up 9 out of 10 singles matches in his win column on a mission for another shot at the elusive belt. He pulls a surprise entry dressed in triple black and immediately starts playing with the muscle model asking if his abs are still hurting from their first match. No real terms were set up for this rematch so the two of them settle on a ‘first to 3 submissions’ low blows match. This is going to be one hell of a fun and painful match! They shake hands before locking up, which has Ethan taking first control with a powerful headlock. Chase quickly reverses the tide and locks on a tight reverse choke hold. The action is swift in this round until Ethan connects with a few low blows and gains the first submission finishing by flexing his muscular biceps kneeling on a stunned Chase. The beaten musclegod shakes off the initial submission knowing that it takes three to win this match. He comes out and is much more aggressive in Round 2 dishing out some of his own low blows to Ethan’s impressive package. The Punisher retaliates with low blows and crotch stretching until he gives just a glimpse of an opening, Chase quickly capitalizes with an all-out assault on Ethan’s juicy family jewels and is forced to scream out a submission. These super studs are now tied at 1-1 This match is bursting with non-stop power-packed action from both of these hot bodies dishing out nasty and painful low blows until one of them ends this battle by punishing and pulverizing their prey’s prominent crotch as he whimpers his final submission. The winner flexes his imposing muscles in victory, then glibly offers a third match to the sore crotch groveling loser. Let’s hope that happens!

Naval Aviator Officer Decker is just returning from a test flight in an F-14 Tomcat with a plebe from the Navy Strike Fighter Tactics Program. As he returns to his office he’s notified of a civilian that has breached the base security. Officer Decker is instructed to perform a security sweep of his building and the surrounding facilities to identify any signs of the intruder. After he clear’s his building and several other surrounding facilities he enters the base gym to perform a sweep. As he is finishing his security sweep of the gym he comes upon the civilian the brass is desperately searching for. He finds Blake Starr in the ring and asks ‘Who are you?’, ‘What are you doing here?’ Blake is an adventurer who likes to challenge the limits, and today he dares to enter the danger zone. Office Decker takes the incident into his own hands and climbs into the ring to peel off his flight suit which reveals his muscle-bound body. Blake taunts him saying ‘Let’s see if the man in the suit holds up to the honor of the suit.’ He’s going to resent he said that! Dash replies “I’m going to fight, and you’re going to lose”. Blake hits a few flexing poses and that starts the action. They tie up and the bigger Dash shoves the smaller Blake into the corner turnbuckle and starts throwing bombs into his shredded abs. He throws the intruder to the mat then locks on a rear choke hold and follows with a hard landing boston crab which has the unwanted intruder screaming in pain. Both guys put up a valiant fight with a mighty arsenal of holds including; an excruciating over the shoulder backbreaker, an agonizing hangman, an out of this atmosphere camel clutch, a sonic test of strength, a chokehold countdown, and a need for speed beating and bruising to win. Can sly Blake fly under the radar and mount a surprise attack? Or will Officer Decker blow the intruder’s MG-28 out of the air to crash and burn?