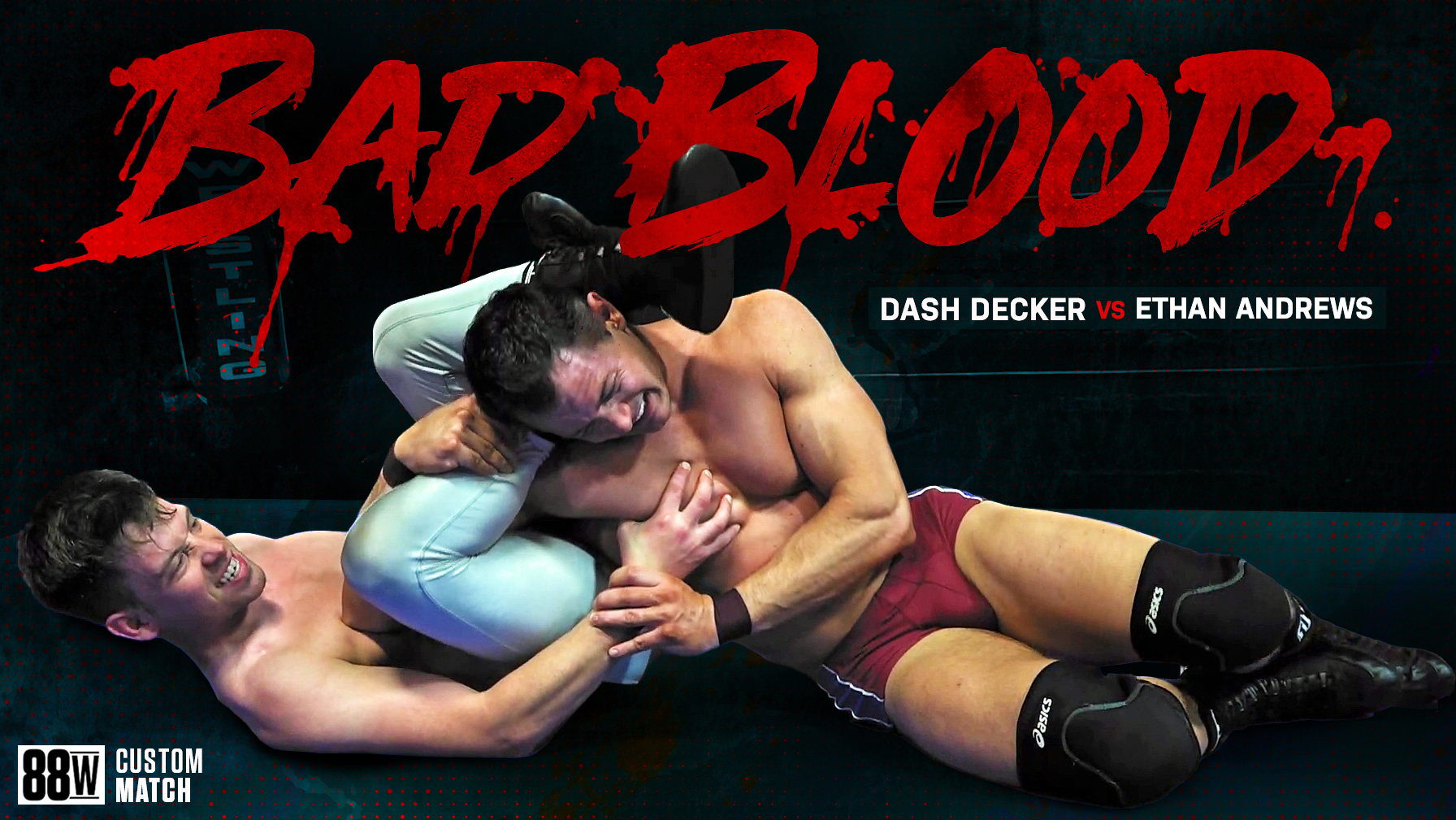 This is the third and final installment of this bizarre bromance trilogy between ‘The Chosen One’ Dash Decker and ‘The Punisher’ Ethan Andrews. The two superstar veterans have been battling each other for years, and each match has bounced between a hot budding bromance and a Hatfield and McCoy type bad blood feud. In the first installment of this trilogy, they met in a Grudge Match in Catalog 4 where Ethan manhandles the bigger Dash by punishing his ripped abs, choking him out, and finishing him off with a dastardly painful low blow in the corner turnbuckle. With that win, Ethan proposed a date night with his beaten opponent. In the second installment of this trilogy, the two studs met in their Bad Time to be in Love rematch in Catalog 7. Dash pulled a no-show for Ethan’s date night and instead challenged him to a double or nothing match. The Chosen One switched his strategy and went all out on the power attack while Ethan was on a wild rage for being stood up. Ethan scored with a dominating all-out attack, but it was Dash’s power moves that ultimately spelled doom for Ethan as he had no choice but to scream out a final submission in this 3 round thriller. Today they meet once again to settle the score! Dash enters the ring first in his burgundy trunks and black boots and begins to pump up his hot bod with a series of push-ups. Ethan is wearing silver tights and black boots as he sneaks up on his foe and plants his boot across Dash’s neck, pinning his face to the mat. He tells Dash he still wants that date and says ‘I don’t care what I have to do to get that date.’ They tie up with Ethan scoring first shoving Dash back into the corner turnbuckle, then shoves his size 10 boot into his throat. The Chosen One is caught off guard as Ethan proceeds to wrap a tight rear chokehold that has him gasping for air. Dash is able to turn the tables with a sly neck breaker, then clamps on his own chokehold followed by a running bulldog into the corner. Both superstars know the stakes are very high in this 35-minute marathon match and each will test their limits to win. The back and forth electrifying action goes for a full 3 rounds until one of these warriors is left lifeless on the mat and the victor straddled across his chest posing his proud muscles. You won’t want to miss this match!

* This match is from our Gold Label Custom Match Series, many thanks to our customer who created this electrifying non-stop action match that settles the score for this hot budding bromance saga.