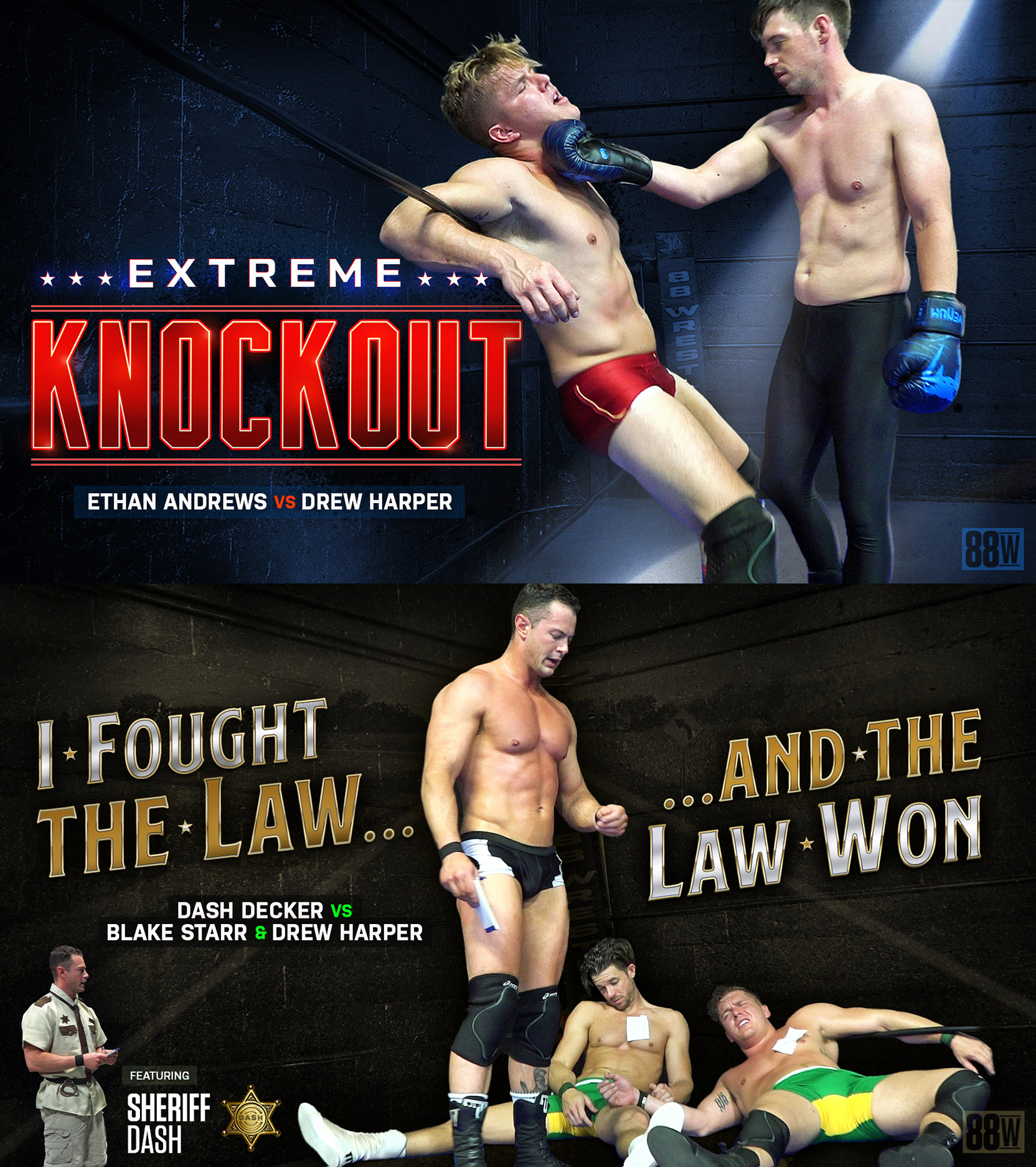 Ethan Andrews is known not only as a wrestling superstar and fan favorite, he also trains in other combat sports including boxing to sharpen his skills. He’s also known to defend his status here at 88W and any newbie joining the roster is taking their chances challenging him. Today the 205 pounds powerhouse Drew Harper is going to do exactly that! Drew has wrestling experience and looks confident in his corner, but Ethan is always confident when he steps into a ring. Drew has the size advantage by 30 pounds, but Ethan has beaten bigger and better. The guys meet at the center of the ring and Drew sticks his hand out to shake Ethan’s hand using it to gain a quick advantage. Drew wraps a side headlock on the punisher then follows with hip tossing him to the mat. This doesn’t sit well with Ethan, usually he’s the one pulling that trick on the rookies. But the upper hand doesn’t last long for the bigger powerhouse, Ethan quickly reverses the control. He takes on a surly attitude and begins to make Drew pay! He zeroes in on a nasty, brutal attack on Drew’s abs and pecs. He softens the big boy up by applying a head scissors, figure-four leg lock, and a painful chin lock first before moving on to a cruel attack on his abs and pecs. Drew fights back as best he can until he’s just overwhelmed by the multitude of painful holds the punisher is dishing out on him. Ethan strikes with a mean, vicious claw hold submission which has Drew pleading for him to stop until crying out an agonizing submission. As round two begins, Ethan declares this is too easy and pulls on his boxing gloves to even the playing field, but it doesn’t help. Ethan punishes, pummels, and pounds the shit out of the big boy! This match is likely the closest thing to a total squash in the history of 88W! As Drew is out on the mat self-satisfied Ethan ends the demolition and domination of the rookie by saying ‘maybe I’ll see you around the locker room, if you ever wake up!’ A severe and ruthless squash job!

Recently, Blake Starr and Drew Harper got together and formed a tag team. Both have wrestling experience, are buddies outside of wrestling, and wanted to try something new. They started reaching out to the indy circuit in hopes of landing a match, and today they landed that first match. It’s over in a nearby town, but anyone wrestling on the indy circuit knows they may be called to drive to any town to score a match. With the match on the card, the boys are jacked up and super excited about the opportunity today. They even bought matching singlets online to make their debut. They jump in Drew’s red Mustang leaving on time to get to the nearby venue, but when they run into traffic they start to panic. They don’t want to miss out on their first tag team match so once they get around the traffic Drew puts the pedal to the metal! They’re hell-bent on making it for their match, but what they don’t expect is what happens next! In order to get to the gym they have to travel through Sheriff Dash’s town, and he’s known to be very strict on enforcing the law. With the boys speeding through his town, Sheriff Dash Decker begins chasing them down. The boys get to the gym on time, but on their tail is Sheriff Dash. The boys hop out of the car and run into the gym, with Sherriff Dash in pursuit and lights flashing. Ultimately Sheriff Dash chases the good old boys into the gym and proclaims he clocked them going 35mph over the speed limit. Of course, the boys deny it, but Sheriff Dash has none of that nonsense. Sheriff Dash takes out his ticket book and begins writing them up, but the boys push back knowing that if they get a ticket the money they are going to be paid for their tag team match won’t even cover it. Now the boys don’t mean any harm so they devise a very intriguing proposal to Sheriff Dash on how they can avoid that ticket, and it works, the three of them climb into the ring. What was scheduled to be a thrilling tag team debut for the powerful duo, instead finds them in handcuffs lifeless and penniless.