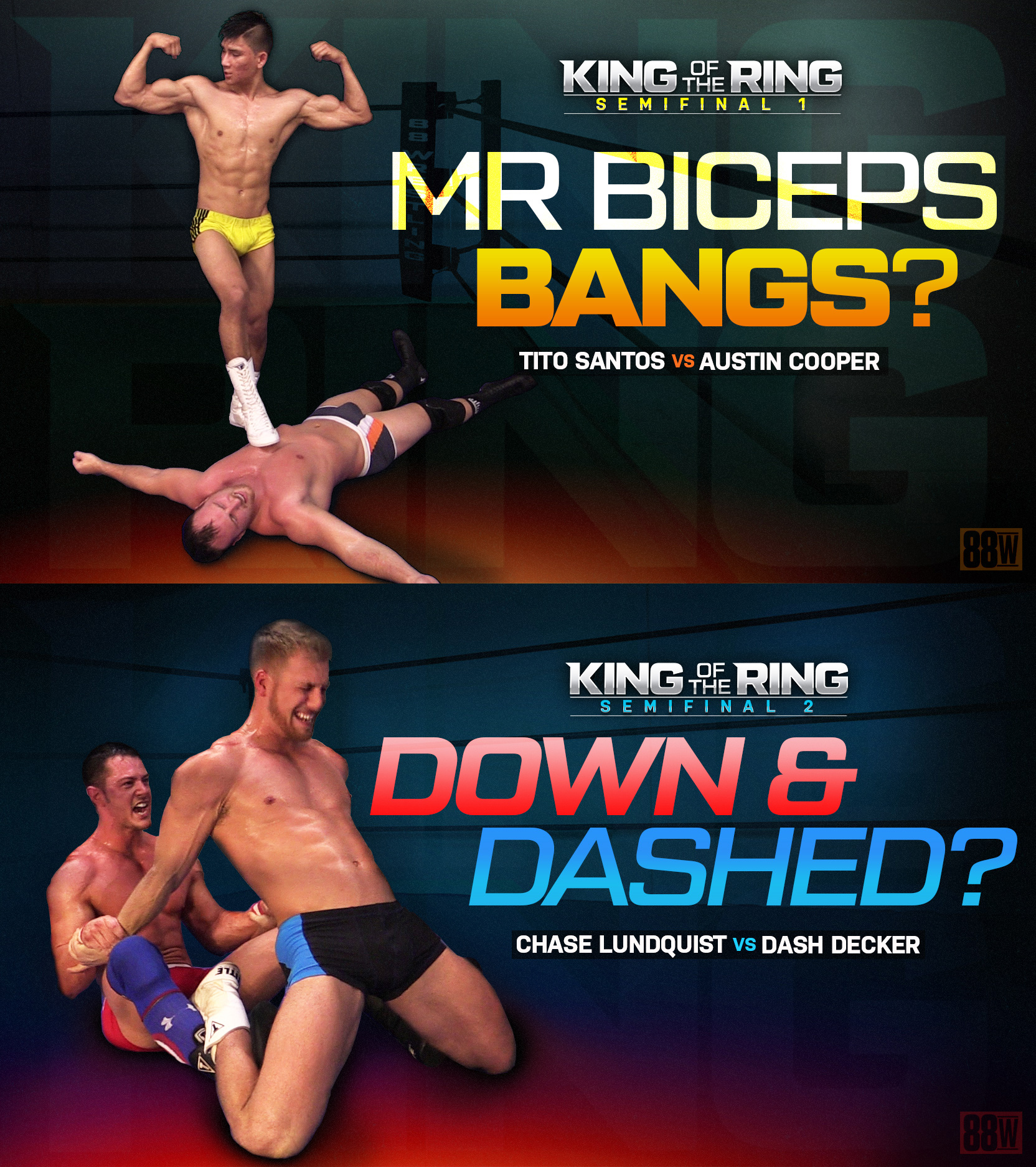 In this semi-final match to crown 88W’s first King of the Ring, we find a struggle between a solidly built rising rookie and a brawny seasoned veteran. This contest provides intrigue and insight into if this new federation is going to be taken over by the next generation of superstar wrestlers like Tito Santos, or will it be defended by the crafty, skilled, time-honored wrestlers that have proven their value to the sport like Austin Cooper? Tito, aka Mr Biceps, arrived at this point by disposing of lean muscled, fellow rookie Evan in their preliminary match. On the other side, Austin was seeded into the semi-finals of the tournament by virtue of his past accomplishments. After both finish their pre-match interviews they get themselves ready for battle. Neither one of these guys is shy about showing off their muscular hot bodies, so it’s no surprise a flexing muscle pose off starts when they step into the ring. Mr Biceps proudly shows off his guns while Coop goes after him with trash talking and mind games. The action is off to a quick start with Austin tossing his smaller opponent around the ring, benefiting from his bigger size. Tito counters with his amateur wrestling skills and muscle of his own. He shows Coop who’s boss as he rides him in a camel clutch while flexing his hard bulging bicep. You would think this would be an easy contest for Coop, but the match goes a full 3 rounds. Does Mr Biceps Bang and advance to the Finals?

Dash Decker has his sights set on winning the KOTR Tournament but the sexy, seductive underwear model Chase Lundquist stands in his way. The Chosen One observed from afar Chase rack up a win in his preliminary match against the smaller showoff Sasha, but wasn’t impressed. Chase outweighed and outmuscled Sasha, but will not be able to do the same against the bigger and more experienced Dash. Both wrestlers shine with confidence in a pre-match interview, Dash with his expressive personality and Chase a no-nonsense message to his opponent. Once they’ve climbed into the ring, their eye-popping ripped muscles explode during an exciting flex off. Which makes you ponder, who has the best body? Surprisingly, Chase scores first with a sneak attack that has Dash floundering to escape a full nelson and then fighting to fend off the blond model’s all-out assault on his back and legs. But, it won’t be that easy to take out Dash, and he’s certainly not going down without a fight. Dash battles his way back using some rough house tactics and moves that the newbie model probably hasn’t seen before. This match is highly competitive, and it’s no wonder considering the stakes that are on the line, this is for an opportunity to wrestle for the King of the Ring title! Dash stretches Chase’s ripped body through the ropes and rides him into the mat with a flying bulldog, while Chase attacks his opponent’s legs by pulling them apart like a wishbone. But which wrestler will prevail? Can Dash impose his will on the model boy, or does Chase score a stunning upset and move onto the KOTR Finals?