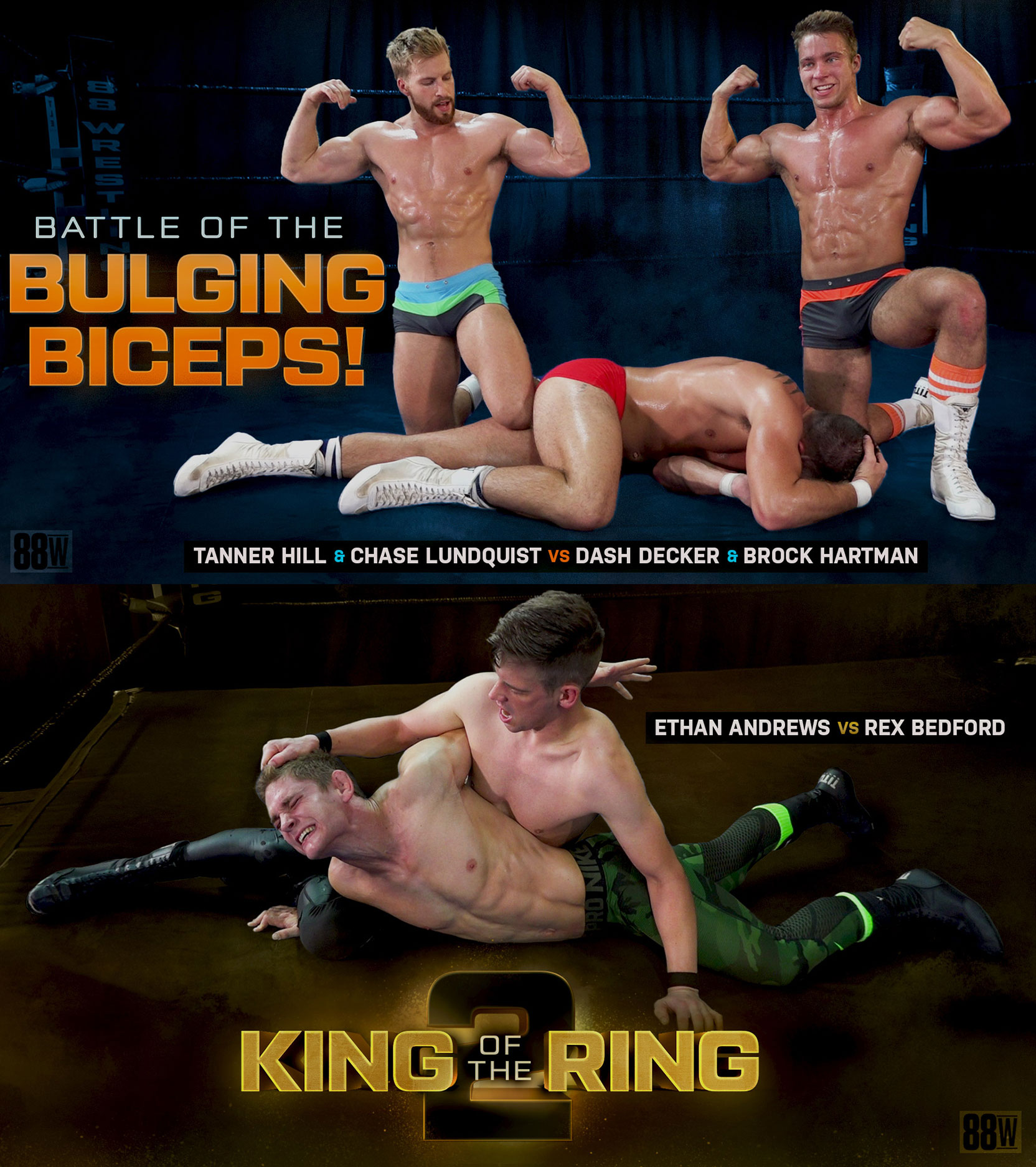 You want to talk muscle boy wrestling, this match has some of the finest muscleboys in the business! There’s more Grade A Beef in the ring today then there is at your local butcher shop. These guys have muscle, know they have muscle, and love to show it off. The proceedings begin with a battle of the biceps, each stud measuring the bulging biceps of his teammate to see how his size stacks up against the opponents. It’s a sight to see these massive biceps being flexed and measured! Which team do you think has the biggest biceps?! Both teams claim bragging rights on the best muscles, and then prepare for battle. It’s the two veterans kicking the action off in round one, and bodybuilder Tanner Hill is hyped up and full of testosterone. He’s not scared of the bigger Dash Decker. He shoves Dash into the corner turnbuckle and connects with a few quick jabs to his midsection that causes the Chosen One to slump down. Tanner doesn’t let up and follows up with a suplex, more punishment to Dash’s abs, then stretches him out on the mat with a bow and arrow. They both tag in their partners and Brock Hartman gains the advantage on fitness model Chase Lundquist. The match is not only a battle of the biceps, but also a battle of the bragging rights. The action is non-stop, hot bodies sweating, and taught muscles glistening as they fight for superiority. It’s electrifying, non-stop action until one team pulls off a shocking finish that includes cold handcuffs and hot iron!

What better way to cap off a full year of remarkable wrestling action at 88W than to finish with two of the elite wrestlers in underground wrestling today, Ethan Andrews and Rex Bedford! Ethan has developed the reputation of being a destroyer and punisher of the muscleboys on the roster while working his way to the top, and Rex has proven his advanced skills in both wrestling and MMA qualify him for a shot at the KOTR belt. Now a lot of you may be wondering where’s Tito? Well, what’s happened with Tito since he won the KOTR tournament nearly a year ago is that he’s chosen to dedicate all of his time to bodybuilding and physique competitions. Sadly, he chose not to come back and defend the title. So with Ethan recently demolishing Dash in their grudge match, and Rex’s steady and impressive outings, this battle for the belt was set. You can imagine Tanner Hill was not pleased when he heard about this, so you can bet he’ll be on the hunt for the belt in 2019. The match begins with the gold KOTR belt placed in the middle of the ring with both guys envisioning it around their waist, and both of them can’t wait to get started. Buckle up, because the action is fast and furious! Each of these studs brilliantly showcases their skills, abilities, and muscle throughout the match. And yes, with so much on the line there’s more than a few cheap shots delivered by both. After nearly 35 minutes of non-stop thrilling action leading up to an amazing finish, there isn’t an ounce of sweat or energy left in their perfectly conditioned bodies. You don’t want to blink, because in a split second the winner seizes on a slight opening that surprises his opponent and he has no other choice but to reluctantly submit in shame. The winner claims the belt and flexes like a king as the sweat pours off his triumphant muscles. What a mind-blowing moment to an incredible match!!!