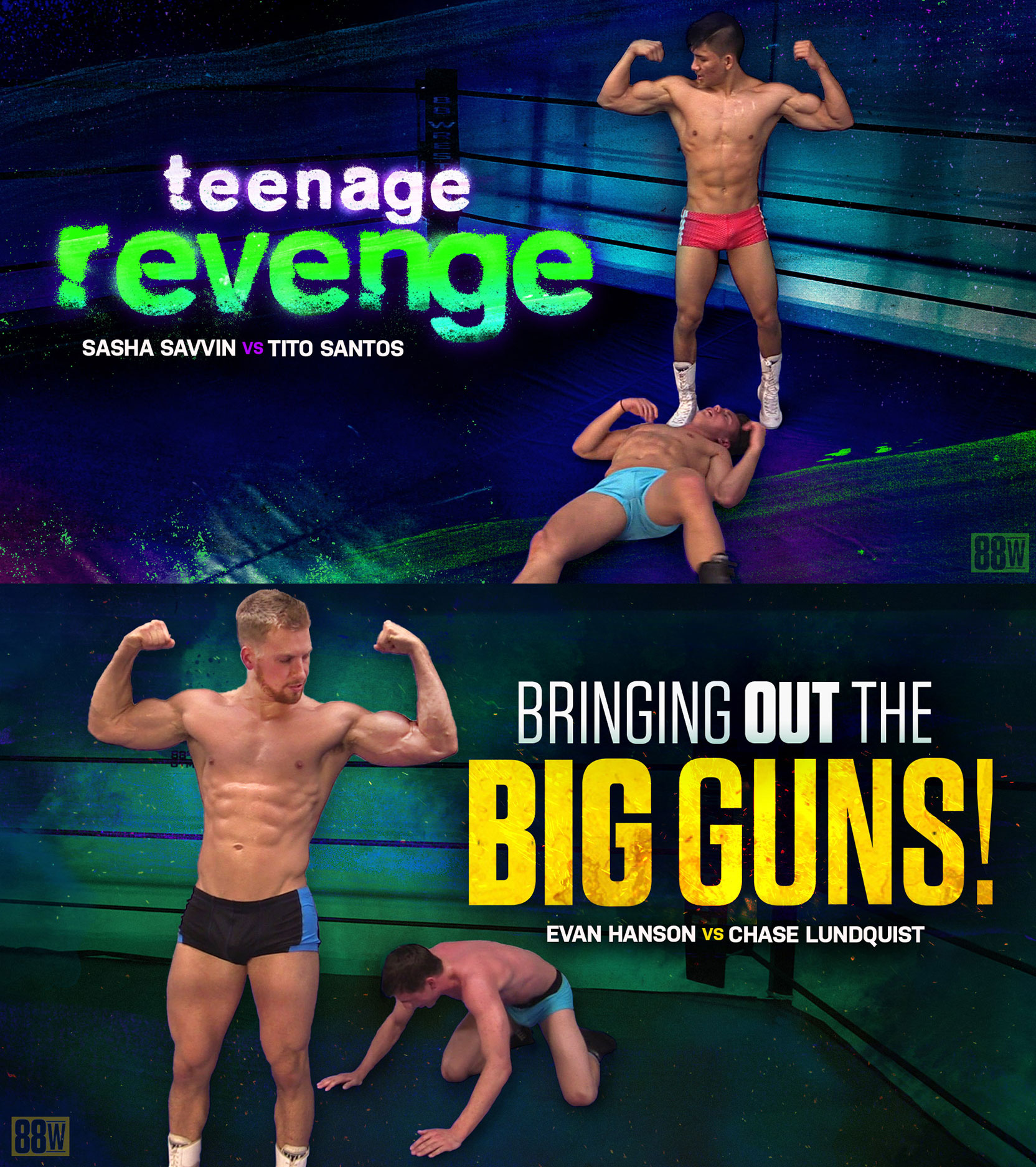 What do you get when you put two teen studs that have a dispute in the ring together, you get teenage revenge! There’s a backstory to this match and it goes like this, Sasha Savvin and Tito Santos teamed up together a while back to take on Dash and Austin in a one-sided tag team match. That match has yet to be released but this match is a result of what did and what didn’t happen amongst the teens on the losing end. Tito was deeply disappointed from the loss and has since blamed it on the lack of effort from his tag team partner. Sasha believes he wasn’t the weak link in their team, and in fact it was Tito who let the team down in defeat. Both teen sensations requested this match be scheduled to settle their score! When Tito reaches the ring he sees his former tag team partner limbering up his aesthetic pleasing physique. Tito climbs through the ropes and the two teenagers immediately begin blaming one another for their tag team defeat. They circle in eagerness as both can’t wait any longer to prove their point. Tito takes control first with a double leg takedown, then some heavy stomps, before locking showoff Sasha in a tight, painful camel clutch. The heated wrestling action takes many dramatic ebbs and flows throughout one long rousing round as both take out their frustrations. The showoff is in prime form with his non-stop chatter and accusations, while the latin sensation’s teen muscles pop while he’s dishing out a beating. Which teen marvel extracts ultimate revenge and proclaims he’s the alpha male in this ring!

Evan Hanson came to 88Wrestling with a sparkle in his eye and a bounce in his step, feeling confident he could make his mark on the roster. Why not, he supposed, he keeps himself in good shape and has good combat sports experience. Plus, he’s been looking to settle a score with Chase Lundquist. These two guys have a history of competing with one another, and Chase has been the on the winning side in nearly all of those competitions. In contrast, Chase has become an instant superstar on the roster, win or lose his fans love him. And what’s not to love, look at him; he’s got model good looks, a flawless aesthetic physique, and is competitive in all of his matches. Evan is so excited about this match he arrives at the gym early, aiming to be warmed up and ready to go. Chase climbs into the ring in his quiet confident style. Although the two know each other, they play head games asking each other who they are in a show of disrespect. Evan proclaims this is his ring, while Chase is amused by that statement. In a surprise move, Evan challenges the muscle hunk to a test of strength to start things off. Knowing that he’ll never win that battle, he quickly changes strategy and scores with a double leg takedown. Both guys have their time to shine, wanting to punish the opponent. Evan likes to smack talk the successful underwear model when he’s in charge, and Chase celebrates by flexing his stunning muscles when he dominates the jiu-jitsu fighter. The rousing action goes a full three rounds and is evenly matched right up to the exciting climax. Can Evan finally squeeze out a victory, or will Chase bring out his big guns to squash his rival?