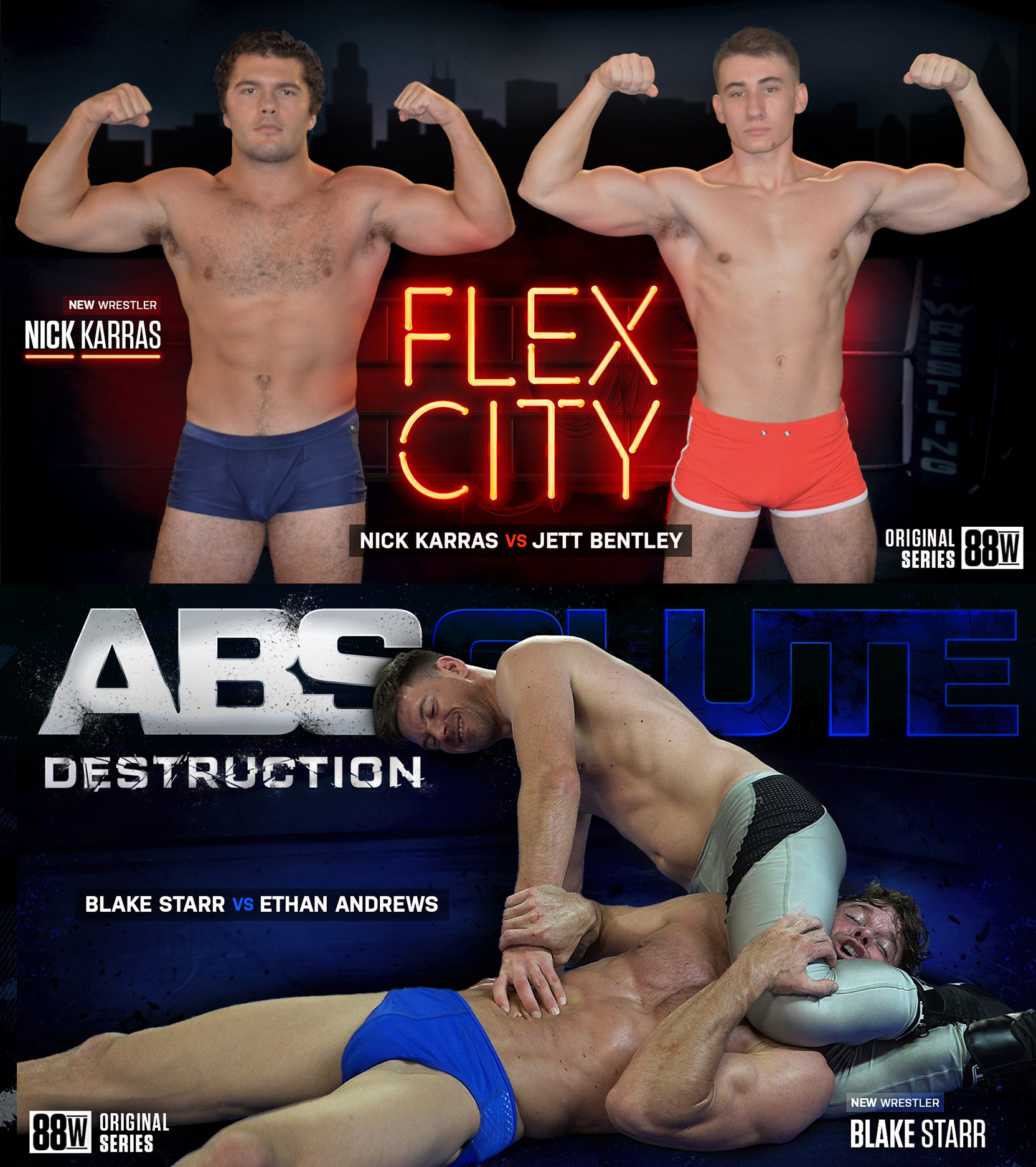 There are lots of muscleboys on the 88W roster and all of them want a shot at claiming the supreme prize of owning Flex City! This match is the fourth installment of our Original Series Flex City, which has quickly become a popular fan favorite. The first episode featured two of the finest muscleboys on the roster, Rex Bedford and Tanner Hill. That one came down to the wire with sexy Rex claiming the keys to Flex City. In the last edition Jett faced off against the more experienced Dash and it didn’t quite go the way he was hoping. That brings us to this muscle filled match today, the fourth edition in this series. Today Jett Bentley thinks he’s got a very good chance of owning Flex City, and taking another step to a rematch with Rex for the KOTR title. His opponent is a rookie by the name of Nick Karras. Nick comes to 88W after a very successful amateur Greco wrestling career and a hot, sultry physique. Nick enters the ring with his imposing stalky body and a determination to win, while the fan favorite gym freak climbs through the ropes flaunting his incredibly appealing aesthetic physique. The boys immediately get down to business with Jett taking control with a quick scoop slam and leg scissors, catching Nick by surprise. He follows up with a tight camel clutch, flexing his delicious bicep while Nick is arched in agony. Jett’s off to an impressive start and in full control of the stunned rookie. The sweat quickly builds on the bods of each stud as they fight to own the supreme prize! Will Nick shoot down the high flying Jett, or does the gym freak take the bite out of Nick the bulldog? The winner stands above posing his stunning muscles over a sweat soaked beaten opponent?

Now we all know Ethan Andrews loves to punish the studs, the hunks, the pretty boys, and the muscleboys when he steps into the ring with one of them. He’s made a living do it. Their muscles don’t intimidate Ethan. He may not quite have the fitness look that they do, but pound for pound his strength and endurance consistently exceed that of his opponents. This match is episode 4 of our Original Series ABSolute Destruction, and Ethan totally owned Chase in episode 2. Today he faces a new muscleboy here at 88W, Blake Starr. Blake’s got a smoking hot body and brings some previous ring experience along with him. He sports stellar ripped abs and beautiful bulging biceps. Blake’s anxious and already in the ring wanting to get a pump before the match begins. He flexes and checks his angles and swole muscles when Ethan enters climbing through the ropes. You’ve got to think the punisher is salivating at the thought of getting his hands on the new guy’s perfect six-pack abs and impressive hot bod. Blake may be impressing himself in the mirror, but he’s not impressing Ethan. He stands directly in front of Blake, blocking his views in the mirror and taunts him saying ‘I’m going to own those abs by the time I’m done with you!’ Blake laughs at the threat but Ethan quickly delivers a gut punch that rouses the muscleboy. Blake scores with a few cheap foot stomps but that only angers Ethan. He hoists Blake up from behind and then drops him onto a devastating gut buster and drives an agonizing ab claw into those perfect abs. This sets the tone for the match with Ethan intent on delivering a vicious and dominating beat down of Blake’s pretty abs and the rest of his precisely muscled body. Someone must have been naughty this year because Ethan’s anything but nice as he continuously gut punches and bashes away at the new boy’s abs while also destroying every other body part. Blake attempts a comeback based on pride and courage, but after a while he’s just begging Ethan to stop. At times it looks like the muscleboy doesn’t even know where he is, though he’s searching for a way to escape. If you like gut-punching, you’ll love this match! If you like domination, you’ll love this match!  If you like seeing pain and torture inflected, you’ll love this match! And if you’re a fan of Ethan’s, you’ll definitely love this match! It’s our most vicious and sadistic match to date. Come enjoy the show!