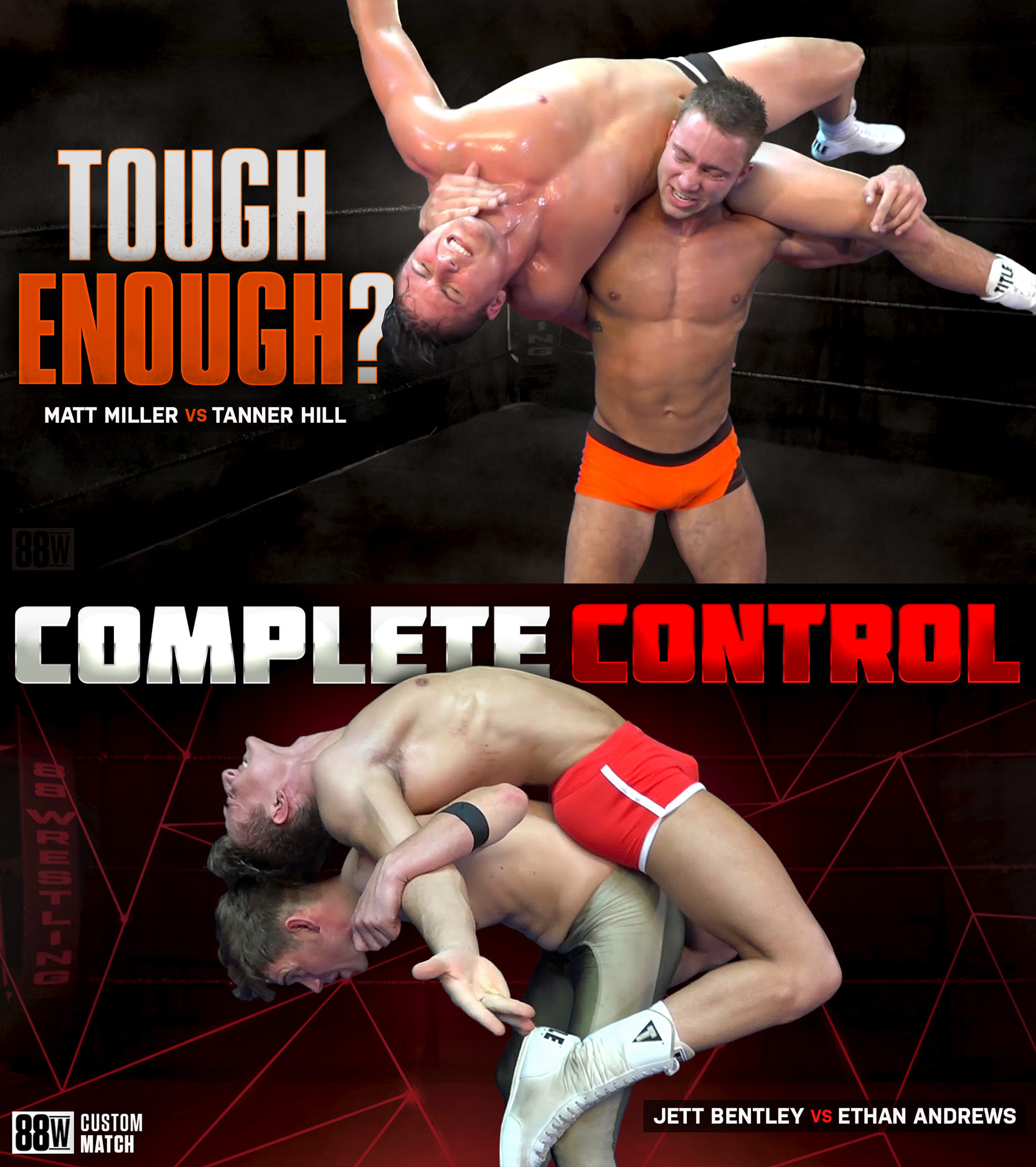 This match was the predecessor to the first tag team match in our new original series called Muscleville. This series was created to one day crown a tag team champion here at 88W. When Ethan got wind of this news he immediately went out and targeted Jake as a tag team partner, and when Jake instantly agreed they formed their team. Tanner Hill, on the other hand, decided he’d have a tryout to find his tag team partner, and the first in line was Matt Miller. Tanner knew Matt was new to the underground wrestling scene but liked what he saw and heard about Matt’s skills and fearless attitude. Thus, this match was scheduled at Tanner’s request. Now, anyone who saw the Team Ethan/Jake vs Team Tanner/Matt in that Muscleville tag team match knows that Tanner’s strategy didn’t quite go as well as he wished. Ethan and Jake mostly controlled and dominated Tanner and Matt in that match, and capped their victory with an embarrassing dual submission hold on the muscleboy and the rookie. In this match, Tanner starts trash talking the rookie right off the bat but when they lock up for a test of strength it ends with a surprising finish in a draw. Tanner’s impressed, he thought he could out muscle him but Matt shows his strength. As they exchange the control over the course of this tryout, Tanner relies on his powerful muscles to handle the rookie with a ferocious torture rack, Boston crab, full nelson and a back-breaking crucifix. While Matt equally shows off his amateur wrestling skills by constraining and restricting Tanner’s pretty muscles on the mat with leg scissors, chokeholds, surfboards and punishing armbars. Did Tanner find Matt tough enough to be his tag team partner? Oh, you bet he did!

Get ready for an AWESOME match! Ever since Jett Bentley got schooled by Ethan Andrews in their Making the Team match in Catalog 2, he’s been anxiously awaiting a chance for a rematch. If you think Jett is going to be a pushover in this match like he was in their first encounter, you’re sadly mistaken. The gym freak has made tremendous gains and progress in the ring since that punishment. And, he’s also made huge gainz with his fantastic physique. His biceps are bigger, his chest is bigger, his legs are bigger, and his ripped abs look even more amazing! This time around the match is very even between these two warriors. There’s give and take throughout the match with each wrestler gaining complete control of their foe, and enjoying every minute of it. But before the action starts, Jett challenges the punisher to a pose off knowing he’ll win that contest all day long. But Ethan doesn’t back down and tells him it’s not just about the muscles when you’re in the ring, it’s also about the skill. Jett’s bigger muscles, better body, and newfound wrestling skills all combine to control and dominate Ethan in the first round controlling all of the action with tight chokeholds and a rib crushing bearhug sequence. But in round 2 Ethan delivers a pulverizing ab bashing to the gym freak’s prized six-pack you have to see to believe! This evens the score! In round 3 a confident Jett tells Ethan he’s going to make him kiss his ass, and he does just that! Wow! We all know how Ethan loves dishing out the punishment, but in this match is he the one who has to take it? This 30-minute feud has it all; sweat-soaked muscles, incredible action, and their manhood on the line which all lead up to a climactic ending with a surprising finish!

*This match is from our Gold Label Custom Match Series, many thanks to our customer who ordered this mind-blowing match.