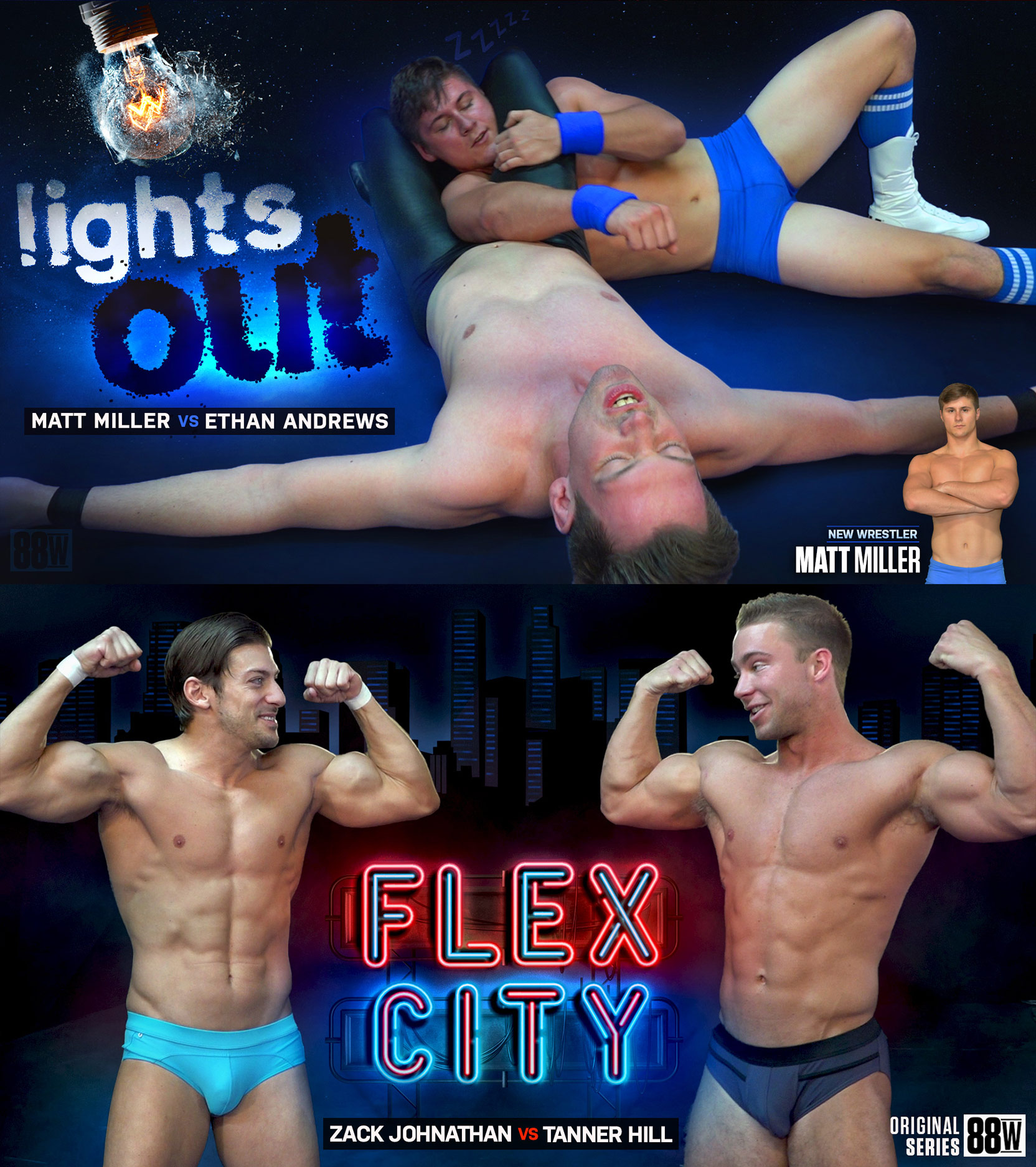 Ethan Andrews‘ been on the warpath since losing the King of the Ring belt to his arch nemesis Rex. Soon after that match, he took his anger out by punishing and pulverizing Tanner’s bodybuilder muscles in a ‘Who’s Your Daddy’ match. Poor Tanner couldn’t work out for more than a week after the beating his body took in that match! In today’s match, Ethan steps into the ring with 88W’s newest wrestler. Matt Miller is the popular school jock; he excels at every sport he plays, has a nice overall aesthetic look, and confidence oozing from every pore. I’m sure you had one in your school. You know the guy, he was the guy you either loved or loathed. As it turns out, Matt also brings years of amateur wrestling experience into the ring and he ain’t afraid of anybody. Ethan starts with a little trash talk and explains to the rookie who he is and why he’s here, but that doesn’t trouble Matt. He barks right back questioning the superstar’s age! Of course that doesn’t sit well with Ethan and he secures the early control and scores with a gut buster that swiftly gets the jock’s attention. The punisher then locks on a tight camel clutch and flexes his impressive 14 ½ inch bicep for the camera. Matt’s able to survive the early onslaught and turns the tables by clamping his own camel clutch on Ethan and flexing his own peaked muscle. The school jock shows he’s able to stand up to and hold his own as the action swings back and forth. This is one supercharged match that ends with a wet finish and the loser not knowing what just hit him! You’ll want to see this one!

This is the second episode of 88W’s standout original series ‘Flex City’, which has caught on very quickly with our fans. Both of these studs have sensational physiques!  Zack Johnathan is more aesthetic and keeps himself in phenomenal shape for like forever, while Tanner Hill leans more toward the bodybuilder muscles and many of you have witnessed the impressive evolution of his physique in recent years. In the first episode of this series, the bigger Tanner was overwhelmed by Rex’s muscles, speed, and ring experience which led to the cage fighter claiming a hard fought victory. Could the same happen to Tanner in this episode? This match is about muscles, ego, ring savvy, and head games. Zack has much more experience in the ring, while Tanner wants to gym talk about how much weight he pushes. Both of these hot hunks like flexing for their fans, so it’s no surprise a flex off gets going that showcases their mouth-watering biceps, triceps, and shredded six-packs. The Z-man tells him today they’re in a ring, a wrestling ring, not the gym as they get down to business. They lock up in a test of strength and muscles pop and strain, but no clear winner is determined. Zach is able to gain the early advantage on the blond builder with a side head lock and flexes his power peaked bicep, while Tanner replies with his own flex shot. If you like watching two sexy studs flex their muscles, this match has muscles, muscles, and even more muscles flexing until the very end. The incredible sights and action go back and forth throughout the entire match and it isn’t until the final minute before you know which muscleboy rules Flex City this day!