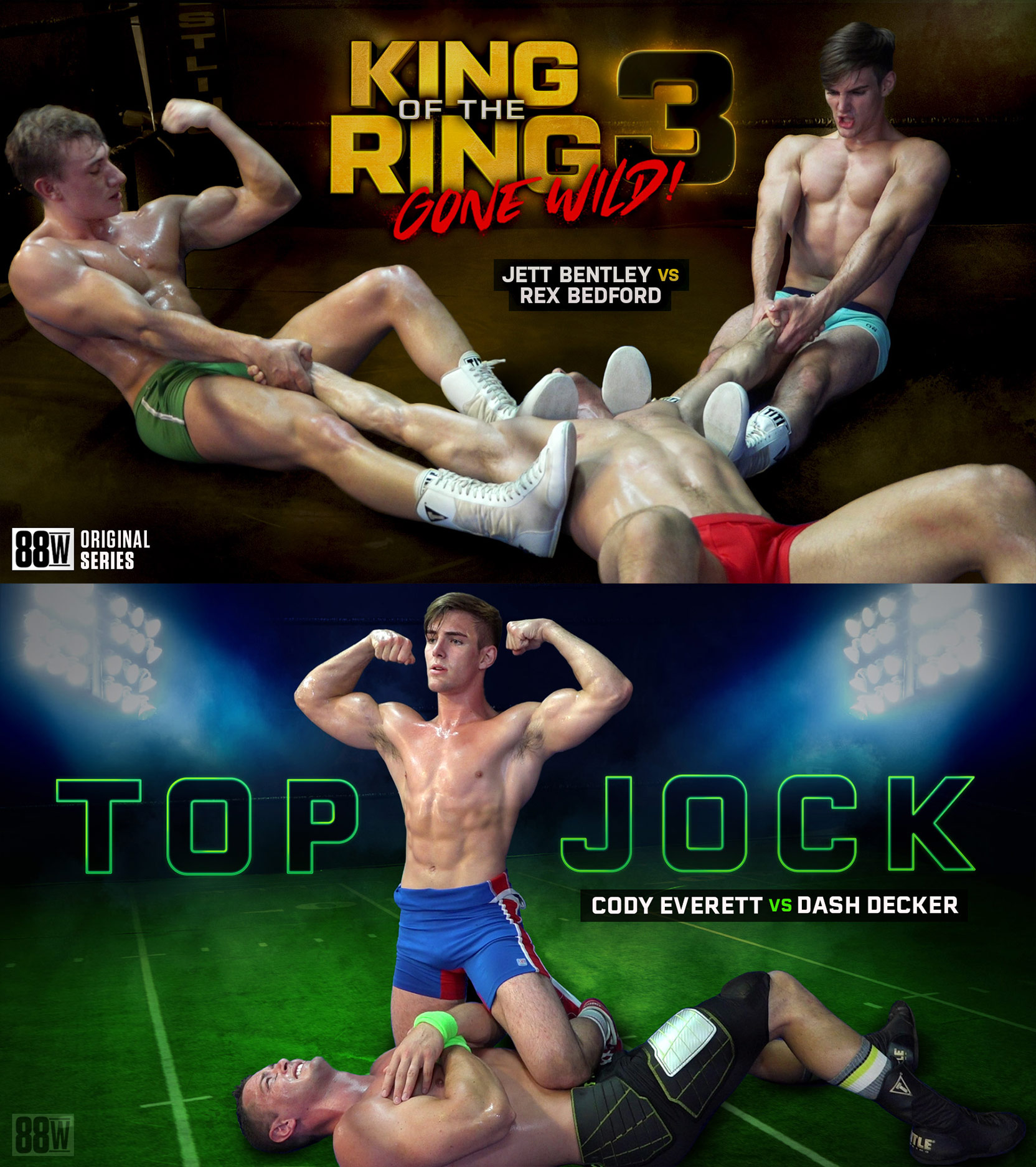 Rex Bedford is wearing the belt and knows he’s going to put his King of the Ring title on the line in this match. But what he doesn’t know is who is the opponent. He’s thinking it may be Ethan or Dash or even Chase. But when he walks out of the locker room and into the ring area he’s surprised and somewhat perplexed to see its Jett Bentley. Rex climbs through the ropes and starts questioning the musclegod why he’s here for a KOTR match. Jett explains he’s bigger and better than ever, his body is a fine-tuned machine, and It doesn’t matter what his record is he’s confident and ready to win this title bout. For the record, in his last match, Jett narrowly lost against Dash in their Flex City match and Rex was barely able to avoid the ultimate upset when he bested the sensational new rookie Cody. The two muscle studs exchange a little banter as they circle and size one another up, Rex in his signature red trunks and black boots, and Jett in his signature green trunks and white boots. Jett isn’t joking today, he scores first with a suplex on the champ then immediately locks on a head scissors and armbar combo. And then for good measure, he shoves his boot into Rex’s crotch demonstrating he’s going to do whatever it takes to claim that belt today! Rex is able to gain his composure and take control, relying on his cage fighting skills. You know by the early action this is going to be an all-out street fight, no holds barred for the belt! Before it’s all over, this match goes totally wild with a little help from a friend! And what you see has NEVER been seen before!

Dash Decker comes walking back to the gym after an awesome practice on the football field. He’s feeling really good about himself, his passes and timing were perfect and he’s pumped for the big rivalry game this week under the Friday night lights. As he gets to the gym he unexpectantly runs into star wrestler Cody Everett who is hanging out until practice starts. Trash talking starts, egos explode, challenges are made and next thing you know these two are going to settle a score! What’s the better sport and who’s the better athlete? This is every wrestler’s dream to get a football player into the ring. Dash climbs into the ring in full football gear; pads, practice jersey, and wrist bands, while Cody enters in his red, white, and blue singlet. Testosterone flies high through the gym as Dash claims he’s here and Cody questions the star quarterback if he’s ready to be embarrassed and does he even know what’s a takedown? Dash quickly finds himself in the middle of a takedown as Cody asserts his skills on the bigger football player. He begins an early assault on Dash’s abs and also focusing on his guns. Speaking of biceps, teen Cody’s not shy about being proud of his inspiring colossal set of guns he brings to ring. This clash runs 31 minutes, and both elite athletes’ bodies begin dripping in sweat as the heat is hot and they strip down from full gear. This is the match you dreamed about in high school! Will it be the Star Quarterback or the Wrestling Champ who claims Top Jock on campus?