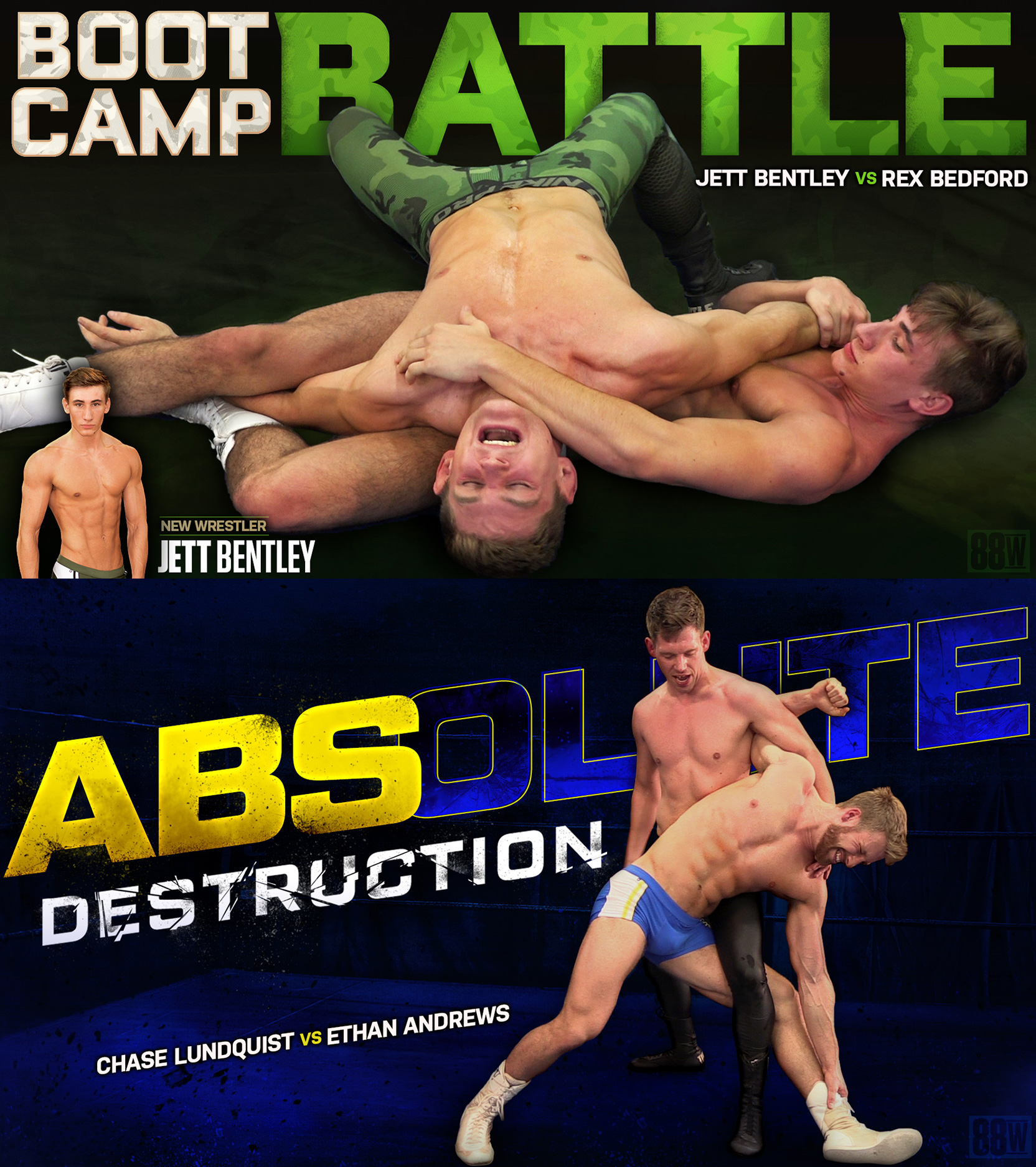 If you saw Rex Bedford’s debut match against Chase Lundquist then you realize how much he’s changed since he stepped into the ring years ago. He brings a whole new collection of colorful holds which make it stimulating to watch as you’re wondering what he’s going to do next. Today, he’s up against a rookie who retains a phenomenal, ripped body year round and also has amateur wrestling experience in his past. Jett Bentley is a gym freak and you can clearly see he knows how to create a brilliantly shredded physique. Flaunting ripped abs, a perfect chest, and bulging biceps along with his model good looks it’s no wonder he’s quite the sensation on social media. But, what we want to find out today is will he be a marvel in the ring? As the action begins in round one, Rex in his camo tights is very confident and takes the initial control with an array of both wrestling and MMA style holds on the more tentative rookie. He launches an attack on the gym freak’s hot body by stretching and pulling on every one of his limbs, including his fingers! The cage fighter appears intent on demoralizing the pretty boy early on, then going for the kill on his wounded prey. But that game plan comes to an abrupt end when Jett reverses the control. Jett’s out to show his muscles aren’t just for show in this battle as he starts putting a beating on the popular fighter. Rex suffers in a variety of sadistic surfboards, vicious body work, and a nasty crucifix which puts his perfectly built physique on full display. Can Rex launch a counter attack on his ripped rookie opponent, or will Jett stand tall and declare victory in this rousing boot camp battle?!

This match is one we’ve all been looking forward to, and if you like seeing abs punished this is the match for you! Chase Lundquist with his model looks and flawless, stellar physique steps into the ring against the bad boy Ethan Andrews who’s recently packed on some muscle to go along with his reputation of destroying the hot bod pretty boys. Ethan salivates at the thought of getting the chance to bash and punish Chase’s prized perfect 6-pack, and putting Chase in the ring against him is like putting a plate of raw meat in front of a hungry Doberman Pinscher. The match begins with the underwear model not even knowing who the bad boy is, asking Ethan his name. This could be good, but this also could be bad for Chase. He unexpectedly takes charge of Ethan at the onset, controlling him with a full nelson, a rib-crunching standing wishbone, a stretching surfboard through the ropes, and simply outpowering him around the ring while he flexes in delight. But Ethan eventually shifts the momentum to his side with a high flying elbow then begins working on Chase’s luscious abs. As the match heats up the ab bashing and clawing is happening everywhere; in the ring, on the mat, in the ropes, and outside the ring as both guys flex their eye-popping muscles along the way. Each wrestler dishes out heavy ab punishment throughout the match, but only one is showing off his proud abs at the end. The winner flexes his mighty muscles in victory as the loser lays exhausted on the mat rubbing his sore battered abs. This is a must see match, and perhaps the best match to date at 88W!