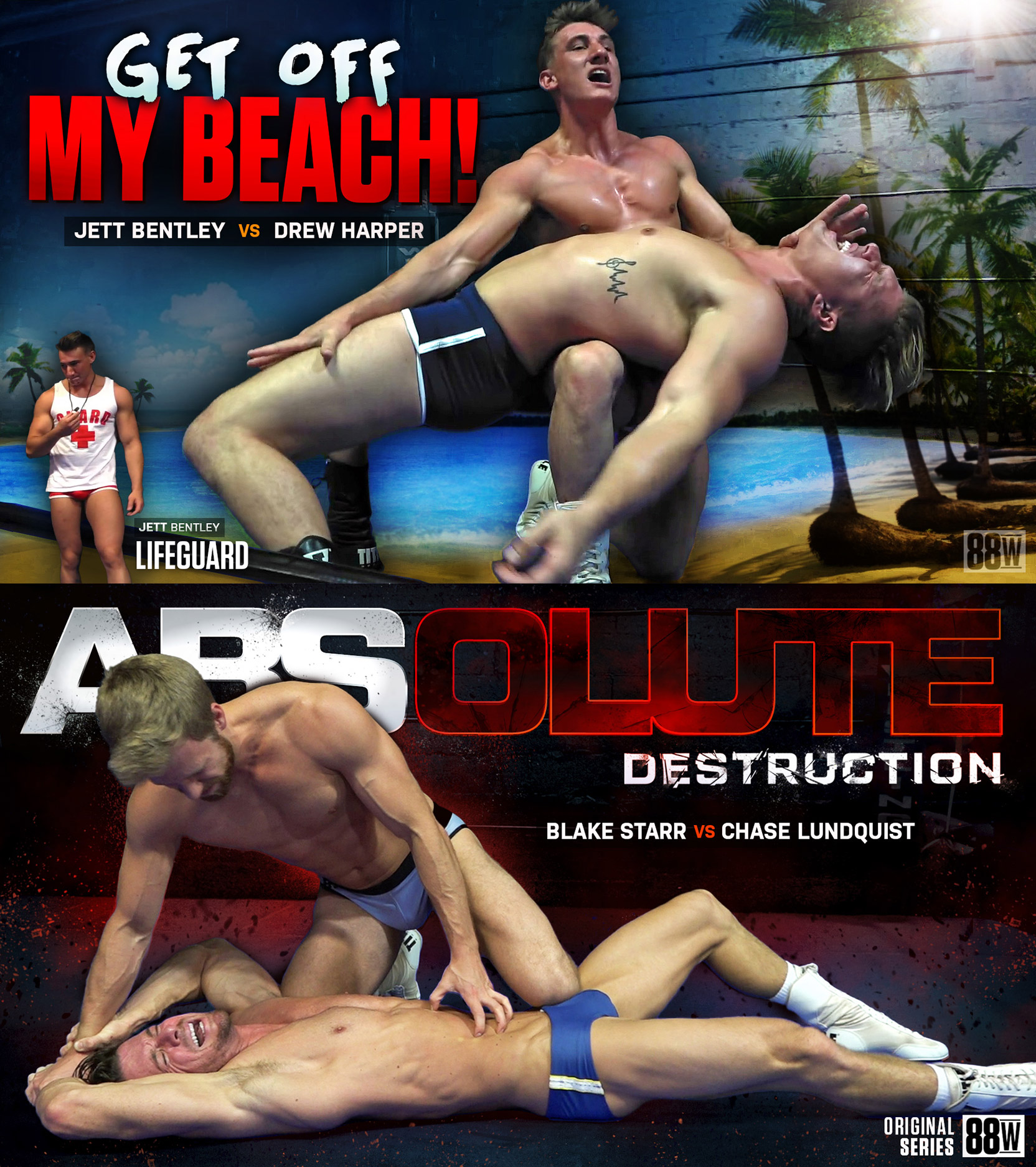 What better way to kick off a splendid summer than with a battle for the beach! Perhaps you’re taking a beach vacation this year, and if not imagine that you will. Just think what it would be like if you are sunbathing on a hot beach and you look up and see Jett Bentley as your lifeguard? He’s standing on the lifeguard tower in his red trunks, white tank top, and his whistle watching over a crowded white sandy beach brushing up against clear blue waters. He peels his tank top off his totally hot sun-drenched body to unveil his incredible biceps, thick pecs, ripped abs, and a muscular broad back. He commands safety and security with his whistle when he’s on duty. As the sun begins to set and most of the crowd gone for the day, Jett comes upon one blonde-haired surfer dude, Drew Harper, that is passed out and sleeping. He blows his whistle to wake the dude up, tells him the beach is closed and orders him to leave. The dude says he isn’t leaving because there’s still sun in the sky and he’s working on his tan. As part of his responsibility, Jett is determined to get him off his beach and persists with blowing his whistle, pulls the surfer up to his feet, and insists he’s got to go. The blonde surfer boy continues to resist which leads to a fracas on the beach. Jett’s strong fight skills kick in and he forces the surfer dude down to the ground with a reverse headlock, painfully stretches him out, then places him in a back breaking camel clutch. This lifeguard means business but this dude just doesn’t want to leave and fights back. Does the drop-dead gorgeous lifeguard throw this character off his beach? Or will the bigger blonde surfer dude get his way? In the end, the sweat-drenched winner proudly poses over an exhausted and choked-out loser.

This battle for the best abs was inevitable. When Chase Lundquist first burst onto the underground wrestling scene he chose 88W to unveil his incredibly aesthetic physique and his thirst to conquer any opponent in his way. He’s been dedicated to investing his time, sweat, and energy into sculpting the ultimate fitness body, one that you can look at and rub your hands over all day long. It’s ripped, rock hard, and amazingly appealing. He’s especially proud of his chiseled, shredded abs and isn’t shy when showing them off. His opponent today in this 88W Original Series ABSolute Destruction match is another wrestler with outstanding abs. Blake Starr recently joined the 88W roster with his lean, ripped, and equally aesthetic body wanting to take on the better competition on the scene. Today’s his chance to work his way up another level of the star-studded roster. It’s not a surprise that both of these hunks have previously appeared in an ABSolute Destruction matches with their shredded six-packs and hot bods, but it is somewhat of a surprise that they both unfortunately faced the same opponent in Ethan Andrews. In Catalog 2 Chase and his mouth-watering abs were destroyed by Ethan who has made a career of pounding and punishing muscleboy’s abs, and Chase was just another in a long line of muscleboys to experience that punishment. And in Catalog 7, Blake stepped into the ring to also challenge the Punisher Ethan where he endured a long, nasty and painful attack on his prized abs. Ethan bragged at the start of that match he was going to own Blake’s prized abs and no doubt he delivered on that promise. Both wrestlers enter the ring and quickly begin bragging and showing off their super six-packs. As the intense action begins each stud is determined to have his hand raised at the end. Abs get clawed, punched, stretched, squeezed, and assaulted throughout all 3 phenomenal rounds. It’s a ferocious fight to the finish to decide who has the better, stronger, sexier abs!