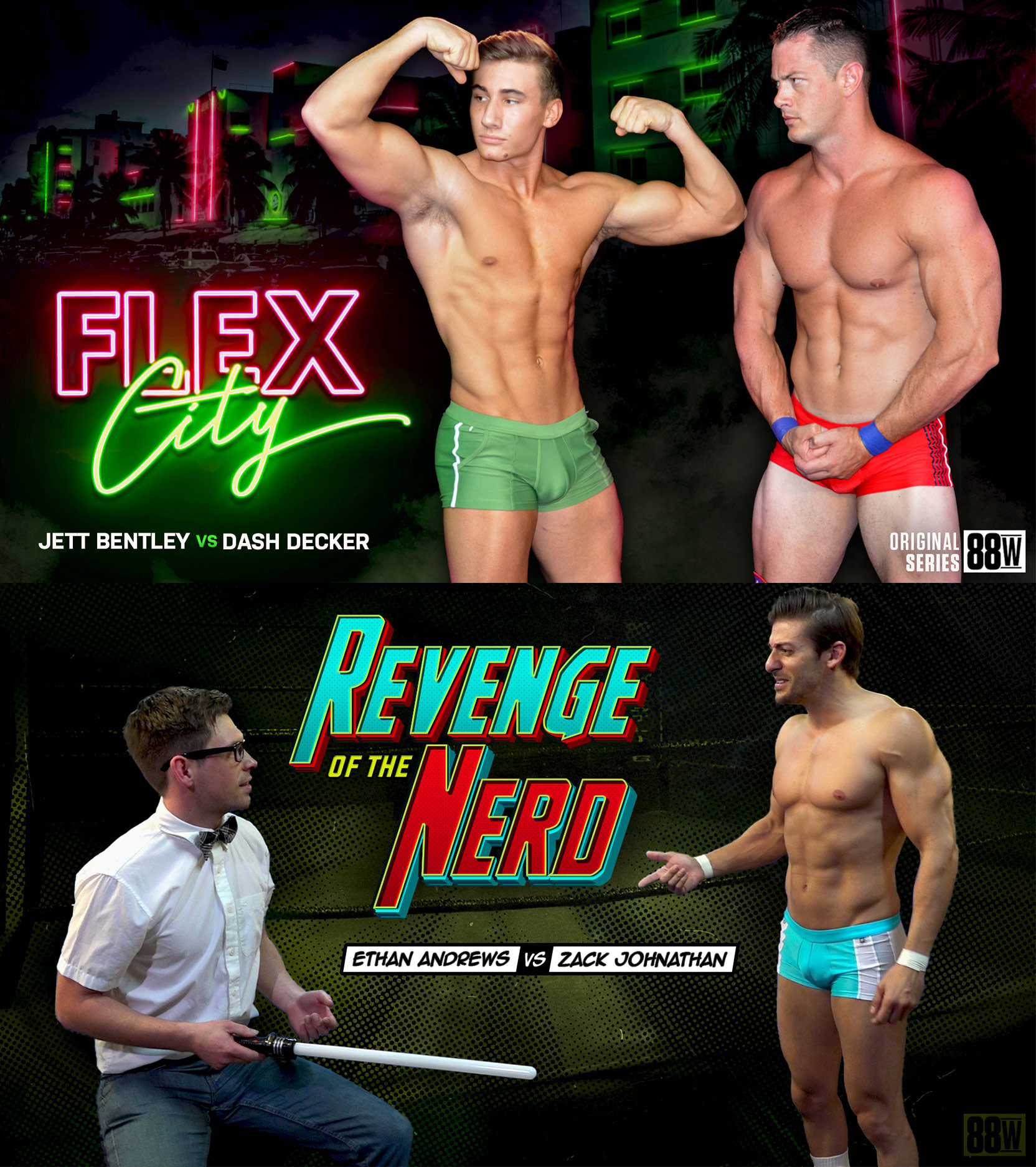 In this episode of 88W’s original series Flex City, you’re treated to nearly 400 pounds of pure muscle in the ring. Two of the best muscleboys in all of underground wrestling! Jett Bentley is back, and bigger and better than ever. He’s added 20 pounds of salacious muscle to his sensational physique. Plus, he’s been working on adding a collection of holds to his wrestling skills. He returns with his eye on challenging for the KOTR belt. His opponent, Dash Decker, is slightly bigger by about 15-20 pounds and more experienced in the ring. In some ways, this match sets up as a youth vs veteran match. Who are you rooting for?! As in every Flex City match, it begins with a muscle pose off. Jett flashes his ripped, ripe new muscles in the middle of the ring, proud of his shredz and aesthetics. Dash also flexes his hot bod and doesn’t seem overly impressed with Jett’s show. A battle of the biceps ensues between the two studs, both measuring their opponents inspiring arms. Jett flexes first, his peaked bicep nearly pops out of his skin and Dash calls it as a 15 ½ inch bicep, even though in reality it’s an impressive solid 16 inches. This is typical Dash up to his dirty tricks and trying to get into the gym freak’s head. Jett wraps the tape measure around Dash’s fantastic flexed bicep and calls it at 16 inches. The reality is both studs ripped biceps measure an impressive 16 inches! This match goes 30 minutes and a full 3 rounds with never-ending flexing! The sweat begins to build almost instantly as both hot muscleboys take their turns beating up on one another throughout this entire compelling contest! The winner isn’t decided until the final seconds, then flexes his muscles one last time as he rules Flex City this day!

How many of you saw the original Revenge of the Nerds movie that was released in 1984? Or one of the three sequels that followed in the 80s and 90s? Can you relate to these movies? Have you ever been the nerd who got picked on in school and wanted to someway retaliate and kick the shit of out some popular school jock? Or, were you the hot jock in high school who got off on belittling the nerds who spent all their time at the library or imagining they’re some superhero? This match relates to all those experiences, thoughts, and feelings for anyone who’s been in that position. And for those who haven’t, it’s an awesome take on a popular classic American movie. The match opens with Ethan Andrews sitting on the ring apron waiting for his fellow nerd buddies to join him in a game of LARP, live-action role play. As he’s waiting, Zack Johnathan swaggers through the gym and notices the nerd in his space. Not thrilled to see a nerd in the gym, the muscle jock begins to mouth off and ask what in the hell is a nerd doing here? Ethan tries explaining what he’s doing there but Zack isn’t buying any of it. Instead, he challenges the dorky nerd to a match. Ethan strips down in the ring and flashes his 14 ½ inch biceps, seemingly not intimidated by Zack’s cannonball biceps and perfectly sculpted physique. The two tie-up with Zack applying a crushing headlock and begins beating up on the weaker nerd. He flips him to the mat and begins stretching out his skinny body while flexing his own eye-popping biceps. The arrogant school jock has this pesky nerd right where he wants him! Or so he thinks! An exhilarating match with a fascinating finish that lasts over 30 minutes, go ahead and treat yourself to perhaps our best-performed match to date! A classic of a classic!