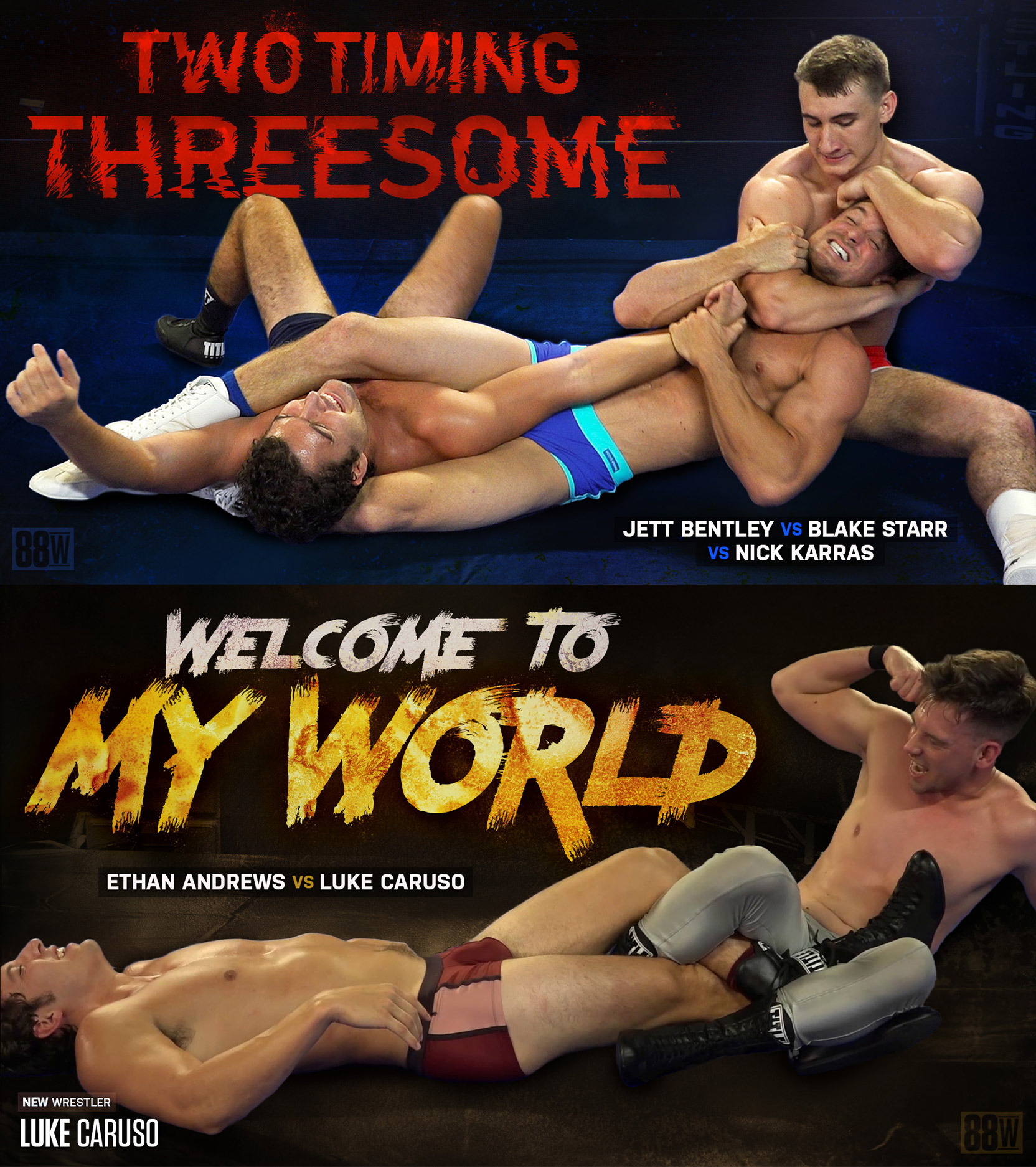 Today Jett Bentley is getting a light workout in at the gym. It’s an off day for him so he’s getting a little cardio by jumping rope. Jett is an all-around athlete, and with the physique he has built over the last few years he not only focuses on lifting and grinding with the weights but also keeping himself healthy and looking awesome. Blake Starr and Nick Karras come along and aren’t too impressed with Jett’s jump roping skills so a light-hearted jump rope competition occurs along with some trash talk. All three guys are very competitive and the jumping rope doesn’t ignite their juices so they agree to jumping into the ring instead. Each of these guys has their own unique style in the ring. Jett is composed and has a solid and steady approach with his skills. Blake is more sly and impulsive in his style and keeps his opponents guessing as to what will come next. Nick is new to the ring but has championship experience in amateur wrestling and no wrestler intimidates him. Throw these three grapplers into the same ring at the same time and who knows what to expect! The action explodes in round one with a lot of two timing strategy on the lone opponent that includes a great deal of pulling and stretching, arm bars, clotheslines, bearhugs, gut punching, and an over the knee backbreaker. These guys are going non-stop with many surprising twists and turns in the first round until two of these muscle bound wrestlers gang up to submit their victim in an excruciating pain inflicting submission. That leaves two sweat drenched bods to battle it out in a fast and furious final round. Will Jett dispose of the two newbies to add another victory to his record? Or will it be the sly muscleboy Blake or the stocky bulldog Nick who claims their first triumph? It’s a heavenly threesome in a chaotic battle that leads to a surprising cold hard ending!

Frequently when worlds collide the outcome can be surreal. When one’s normal clashes with another one’s normal the outcome can be catastrophic. Today’s contest brings two very different worlds into one ring. Ethan Andrews has been in the world of underground and Indy pro wrestling for over 10 years, while his opponent Luke Caruso steps into the 88W ring with a few years of backyard wrestling experience. Ethan has spent countless hours polishing and perfecting his wrestling skills and arsenal of holds which has paid off by ascending him into the elite ranks of underground wrestling. Luke has gained his experience wrestling buddies in the backyard and at the beach during the hot summer days. Ethan’s style of wrestling is focused on technique, endurance, and an uncanny high pain threshold. Luke’s style is more unconventional and a rough and tumble approach. The only thing that these guys seem to have in common is their height and weight! At the start of round one, the backyard wrestler isn’t fazed one bit by his opponent! They circle each other as Ethan calls his opponent ‘fresh meat’ and Luke asserts ‘here I am!’ The punisher scores first with a standing headlock then forcing Luke to his knees. Ethan wraps his legs around the newbie’s waist and his arm around his neck for a tight chokehold. The backyard wrestler is able to reverse the control and locks up Ethan with the same hold. Luke shows an early sign of grit and sends a message that he’s not intimidated. He’s here to win! The rousing action is non-stop as Ethan impresses with a brilliant over the knee backbreaker, a wrenching bow and arrow, and a painful leg lock. While Luke battles back with an agonizing choke over the ropes, a punishing surfboard, and a harsh clothesline that floors the veteran. Which wrestler’s world will prevail, and which wrestler’s world will explode in this bizarre match?