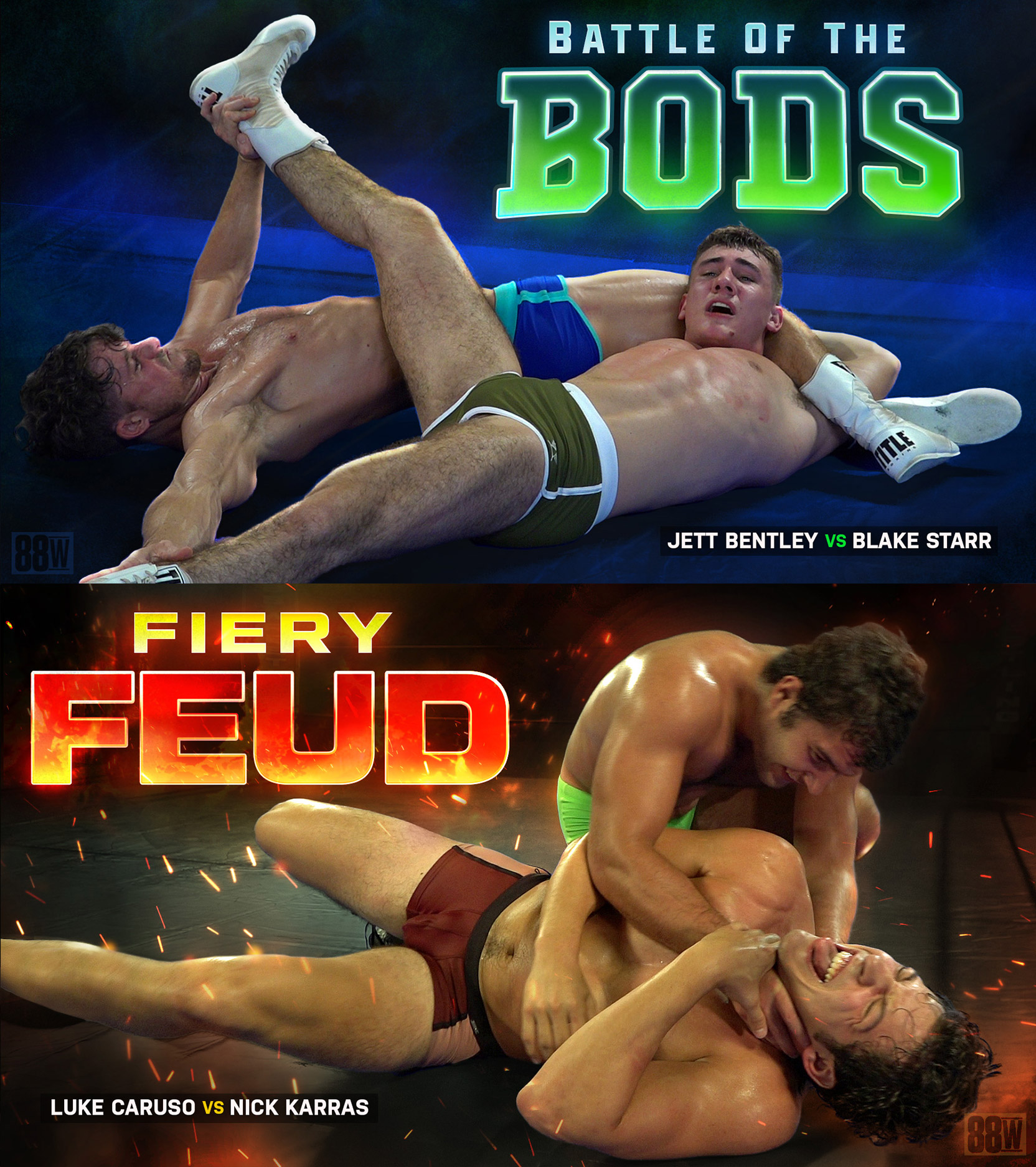 Wow! What a match-up! This is the match a lot of you have been asking for and anticipating! How many times do you get the chance to watch an absolutely stunning fitness model wrestler throw down with another stunning fitness model wrestler in the same ring? Not many! Both of these wrestlers have crafted incredible aesthetic physiques, Jett Bentley having the size advantage and Blake stays shredded year-round. No real bad blood between these two, but Jett wants to make sure the newbie Blake Starr won’t pass him by on the 88W roster. Both guys look serious and prepared in their corners before circling at the center of the ring. Jett tells Blake he’s going to get rolled today, and Blake answers back saying I’ll rock your world brother! The bigger Jett scores first with a powerful scoop slam that rumbles Blake’s ripped bod on the mat floor. The gym freak then scissors his long legs around the sly Blake’s chest and locks on a painful armbar. Jett continues to control Blake’s muscles with a single-leg takedown, a flying leg drop, and full nelson. But Blake is no pushover and reverses the gym freak, forcing him to the mat, stretching him out, then straddles his chest. The arousing back and forth action continues for the full three rounds with both hot bods stretching, twisting, and contorting each other’s sexy physiques, limbs, and muscles in ways rarely seen. With the sweat glistening off their bodies, three straight flying knee drops to the gut spells doom for one of these guys. Which magnificent stud is going to get rolled, and who is going to rise in victory?

These two guys couldn’t wait to climb into the ring and settle a score. Both Luke Caruso and Nick Karras run around in the same circle of friends, and it’s no surprise that Nick is the more popular one while Luke thinks he always needs to prove himself. Growing up you probably had similar friends in your circle. Nick is the bigger of the two and was a successful amateur wrestler, while Luke is a bit more daring and has horsed around with friends wrestling at the beach or in the basement. Both guys are in their corners starring each other down, Luke looking to show he has the fortitude and fight that qualifies him in this group of buddies while Nick wants to put his buddy in place and establish himself as one of the top dogs. Round 1 begins and Nick is on the offensive. He suplexes Luke to the mat and starts to inflict punishment with a reverse headlock, a double chicken wing, then a tight painful armbar. Luke isn’t intimidated and gets to his feet, drives the bigger Nick to the ropes, and begins choking him over the top rope. The hot action continues, and after about a gallon of sweat and close to exhaustion, the winner applies a painful, excruciating submission hold while the looser lays in agony in a provoking hometown showdown.