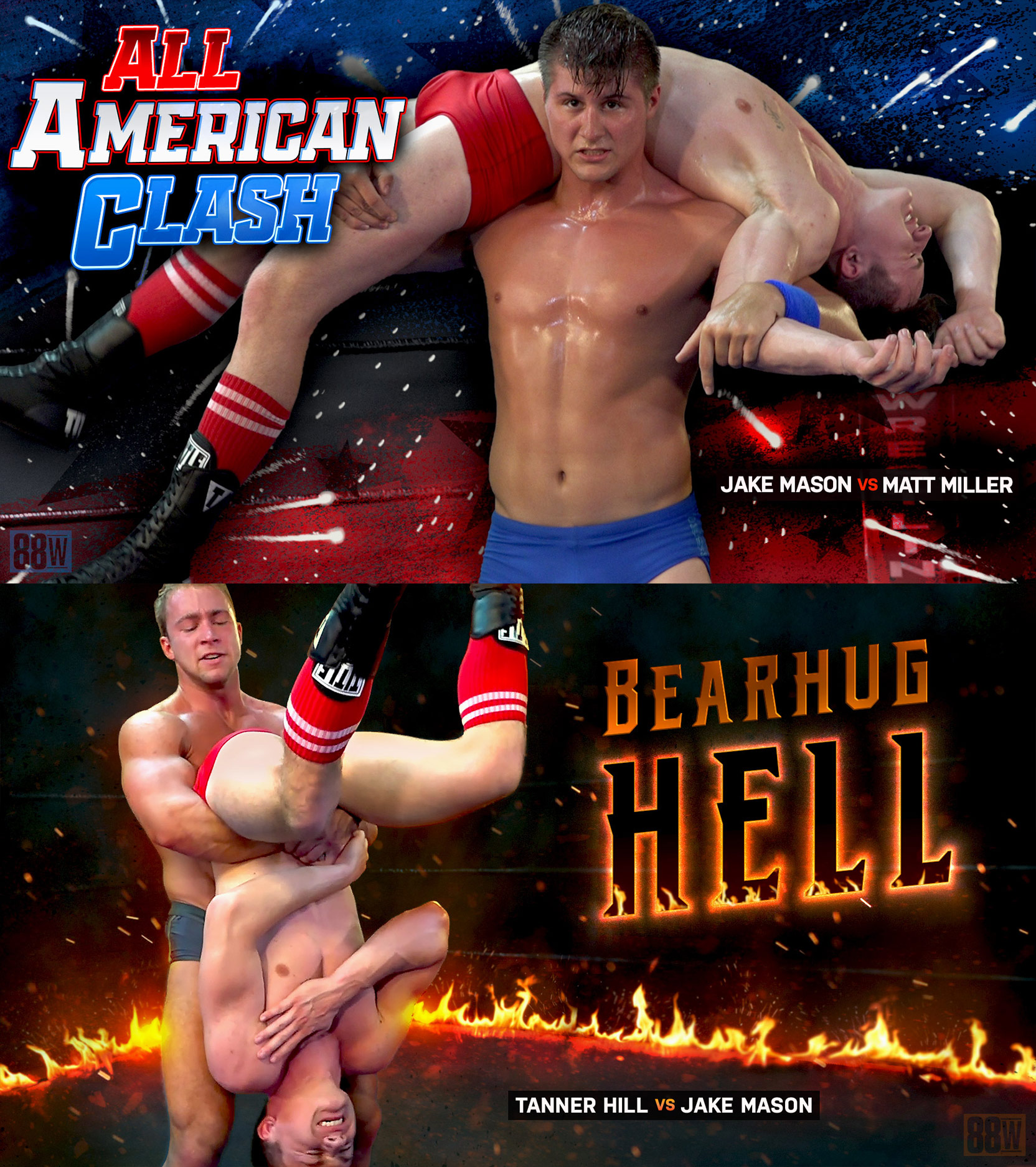 Both of these young wrestlers joined the roster at the same time, and both of them are determined to make it to the top. They both went up against very experienced veterans in their debut match, with Jake Mason pulling off an astonishing upset over Zack while Matt Miller put up a gallant, fearless fight but in the end lost to a superior wrestler in Ethan. Jake’s style is reserved and steady, relying on his cool confidence and his ripped muscles to wear down his opponent and seize the right opening to finish him off. Matt isn’t afraid to step into the ring against anyone, he’s played plenty of competitive sports and loves getting in his opponents face and giving it his best shot. Today they both take aim at victory! As the match opens the rookies circle one another, each sizing up their opponent. Jake scores first with a quick double leg takedown. He hoists Matt over his shoulder then tosses him to the mat so he can stretch him out by riding him like a surfboard. But that doesn’t last long! Matt retaliates with his own surfboard on Jake and follows that up with a nasty camel clutch. Each teen hunk dishes out their own style of a beating during the course of this contest, Jake bends and stretches Matt like a Gumby, while Matt focuses on delivering a brutal ab bashing. This spirited rookie clash comes to a cruel ending when the loser suffers while screaming out a painful submission, and the winner flexing and posing his sweat-soaked bod proclaiming he’s the top jock today!

Tanner Hill and Jake Mason enter the ring thinking this is going to be a best of three match but it evolves into something much more, a first to three submissions of bearhug hell. Neither one of these wrestlers would say that the bearhug is one of their best moves, so it should be very interesting to see who adapts best to the challenge. Tanner clearly has the bigger muscles advantage, but Jake is no slouch and has proven he can compete with the big boys when he submitted Zack with a sadistic ab claw in his debut match. Tanner seems very confident he can squeeze, bend, and break the rookie at the beginning of the match but will that translate to a victory. The muscleboy gains the early advantage on the rookie crushing his ribcage in a chest to chest bearhug with his mighty bulging biceps as Jake tries to fend off the attack. Will the teen rookie pull another muscleboy upset in this contest? Or can Tanner be the first to 3 devastating bearhug submissions? The match is nearly 30 minutes of non-stop agonizing action with one of these studs ultimately suffering in brutal bearhug hell.