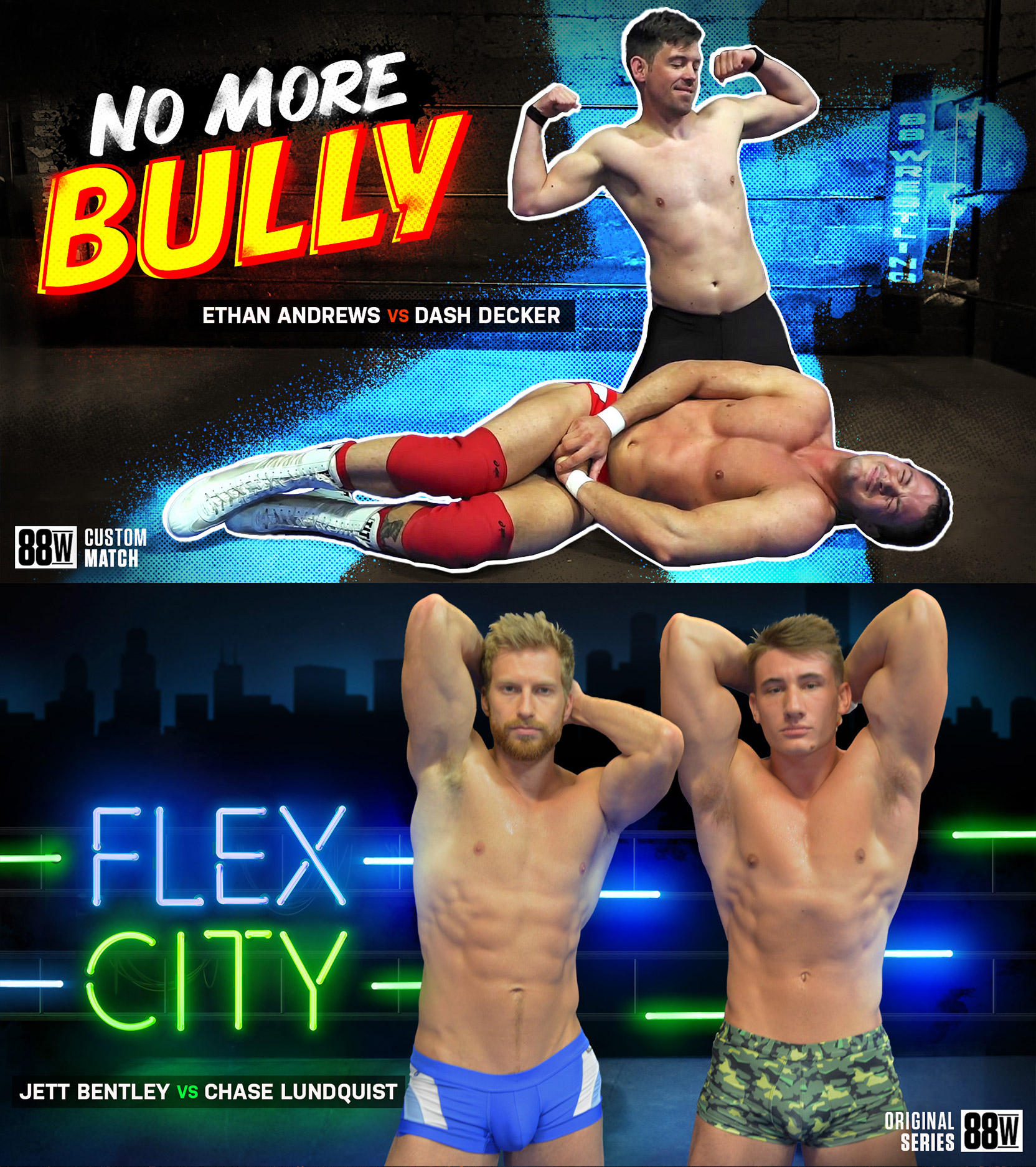 It’s an early hot morning so Dash Decker wants to get his workout in before his match and the sun begins to sear the heat in the 88W Gym. He likes the pump he got so starts flexing his ripped muscles in front of the mirror. He looks good and he knows it! He climbs into the ring and continues to flex and admire himself. And like most days, he feels incredible and unbeatable. Him and his opponent have had a love-hate relationship through the years and have already battled each other twice in singles matches and recently in a tag team match. Ethan Andrews kicked the big boy’s ass in the two awesome singles matches but Dash got a little revenge in the recent Muscleville match. In this match up The Chosen One wants to bully the smaller Ethan with his muscles, strength, and arrogance, while the Punisher’s strategy is to joke, prank, and trick in order to get inside the muscleboy’s head to prove again he’s the superior wrestler. Ethan, sneaks into the ring and begins to mimic Dash’s precious posing from behind. Ethan begins the trash talking saying ‘that was comedy gold right there’ with Dash zinging back saying ‘looking at you is comedy gold, skinny, white, and pale’. That sets the tone for the match. First Ethan challenges the big boy to an arm wrestling match, and defying the probability he wins! Dash is stunned and begins throwing Ethan around the ring and hoisting him high in the air with his ripped massive arms. Ethan reverses the momentum using a few tricks and attacks every mighty muscle on The Chosen One’s incredibly hot physique. The compelling action goes back and forth for over 35 minutes and the full 3 rounds that include low blows, stomps to the crotch, choke holds, and pin falls. Will the arrogant big bully put the punk in his place on the school playground? Or does the sneaky joker have a special surprise for the menace bully?

*This match is from our Gold Label Custom Match Series, many thanks to our customer who ordered this incredible match.

Jett Bentley has been looking forward to this match! He badly wants to extract some revenge from what he thinks is an inferior opponent. You see, Chase Lundquist and Jett have faced off in the ring in three prior matches, and unfortunately for Jett, he’s been on the losing end for all of those matches. His first encounter with Chase was in a 3-way when Jett was a young rookie and Chase and Chad double-teamed the newbie to toss him out of the ring first. He then tangled with Chase in a Muscle Model Misery singles match that saw Chase flexing and raising his hand in victory, and most recently he encountered Chase in a Muscleville match that didn’t end how he thought it would. Today the two super hot studs climb into the ring to face off for who will rule Flex City! Both of these wrestlers have bodies hotter than a match head, Jett with his smooth, tan big bodybuilder muscles and Chase with his perfect all-aesthetic physique. Jett feels confident coming into this match, he’s added even more mouth-watering muscles and now has a size advantage over the swimwear model. But Chase has been on a roll lately, he’s also added some size and disposed of Drew and Blake in recent matches and also was a big factor for Team Dash/Chase to defeat Team Ethan/Jett in their recent Muscleville tag team match. Both wrestlers couldn’t look any hotter in their gear and are eager to have a pose off in the ring. Chase claims he has a VIP pass to Flex City as they compare muscles, with Jett just laughing that off. You can decide who wins the hot sexy pose off, but these studs will decide who rulez Flex City!  Both super studs double down on the flexing and intimidation during this spectacular match, with non-stop action and sweat pouring off their glorious muscles. Will the gym freak Jett flex, intimidate, and dominate his menace into submission? Or will model Chase out-flex and out-wrestle the bigger muscleboy once again. It’s not until the last minute that one of these super hot studs flexes his magnificent muscles in celebration of owning Flex City this day!