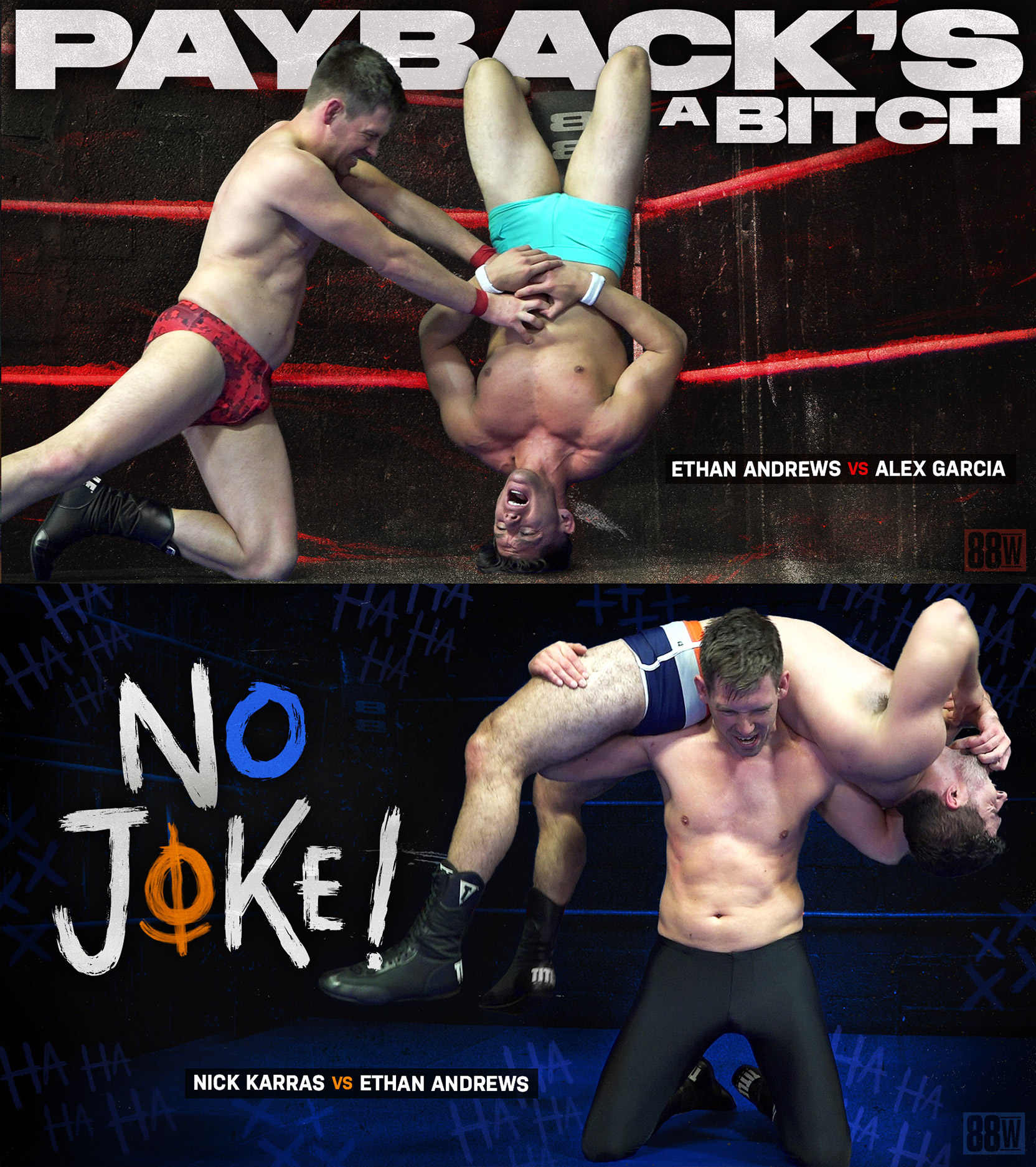 Two Matches on One DVD
Availability:   Ships in 2-3 business days.

This match is being billed as Built Rookie vs Dominant Veteran but it is also much more than that! It is strength vs skill, attack vs defense, and ego vs ego! Sultry Alex Garcia has burst onto the underground scene and is anxious to climb his way to the top. In his debut match, he was able to surprise Nick and pull off an epic upset. In his last match, he made it to the final round along with Ethan Andrews which led to a fateful face-off. Ethan has been dominating and chalking ups wins for the last 10+ years and guarantee he’s not going to allow this rookie to steal the spotlight. He hates to lose, and when he does he gets mad. Real mad! At the end of their Three’s A Crowd match both of these guys demanded a rematch. They both are eager to go one-on-one in a 2 out of 3 rounds to show who the biggest stud is on this roster. Both wrestlers look confident in their corners and both don’t waste any time getting down and dirty with the action. Ethan makes an early impression with a nasty spladle and Alex quickly is on the attack with ab bashings in not just one corner but in two corners. The frantic tone is set early as both studs open their bag of slick moves and dirty tricks that include; low blows, agonizing pec claws, crotch attacks, bearhugs, painful ab bashings, guillotines, boston crabs, ab stretching, a distressing crucifix, and a lot of sweaty muscle-flexing. Each of these guys has plenty at stake in this match! Can Alex pull off another upset statement match early in his career? Or will Ethan inflict too much dark punishment on the rookie and proclaim he’s the biggest stud?

Since Nick Karras has joined the roster he’s revealed his state championship skills, his burly strength, and a solid desire to grind his way up the roster. He’s put in a number of great performances but just hasn’t yet chalked up a string of winning matches. He hasn’t been able to put a finger on what’s holding him back, could it be he hasn’t made a smooth transition from the scholastic mats to the underground ring? Only time will tell. Today he faces a tall task in a much-anticipated showdown with the highly skilled punisher Ethan Andrews. For all the state championship skills Nick brings, Ethan equally has the same high-level skills in the underground scene. Nick seems to have a slight edge in strength, but Ethan counters that he’s already pound and ground his way to the top. This match is going to be extremely interesting! As both wrestlers enter the ring Nick chooses to try to distract his opponent by wearing a clown mask in his entry. Ethan has seen it all in his days and isn’t amused, he takes the opportunity to sneak attack Nick’s muscled body. He pushes Nick into the turnbuckle and attacks him first with an ab bashing, then tossing him down to the mat and begins choking him. Ethan finishes the sequence with a crotch stretching banana split but Nick is able to power out and catches Ethan’s lanky legs in the exact same hold for payback. This sets the ‘anything you can do I can do better’ tone for the entire match. The skilled and speedy action goes back and forth for the duration as the sweat begins to glisten on each of these determined warriors. The winner is able to strategize his skills and strengths to a captivating and stimulating victory while the loser pays the price in pain and defeat. A must-see match!