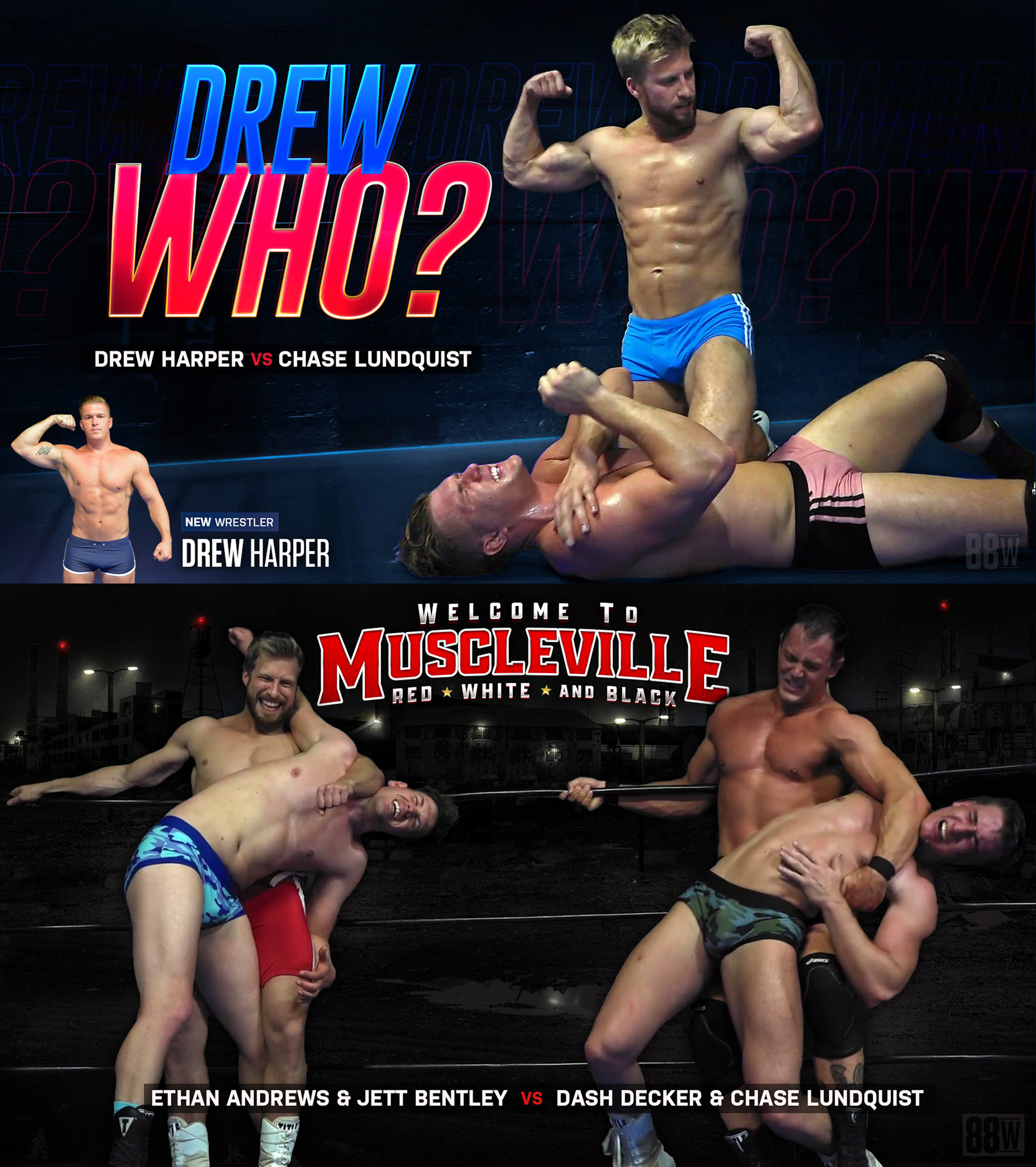 This will be an intriguing and interesting match today! There’s a little bit of something old and a little bit of something new! For Drew Harper, he steps into the 88W ring for the very first time, not quite knowing what to expect. But for Chase Lundquist this is like home to him, his very first match was in the 88W ring. These two wrestlers also bring very different styles and physiques to the ring. Drew is bigger, has a 30-pound advantage, and specializes in power moves. Chase is ripped, incredibly aesthetic, and likes to take the action to the mat. Chase stands confidently in his corner, staring across the ring at his opponent and wonders who the hell is this guy and why do I care? Drew seems a little nervous and unsure coming out of his corner. The guys circle each other and the trash talking begins, Chase asks who do we have here and Drew tells him he’s ‘the new guy, Drew Harper. Chase snaps back yeah I definitely never heard of you. They lock up in a test of strength and Chase outsmarts the big guy with a slick move and following it with a suplex. He lifts Drew up to his feet, whips him into the turnbuckle then tosses him with another suplex which has Drew bouncing across the mat.  Drew fights back with powerful bearhugs, pounds on Chase’s shredded abs, and inflicts pain with a torturous Boston crab while giving a flex to his fans. Chase adds insult by never acknowledging Drew’s name throughout the course of the match. The non-stop competitive action continues for all three rounds before an exhausted winner snatches a surprise victory in the final minutes of an amazing match!

There’s a buzz and electricity in the gym today and rightly so! We are being treated to a trip to Muscleville with 4 of the best underground wrestlers around! This marquee matchup includes; Ethan Andrews who is a legend in the wrestling world, Jett Bentley brings his sensational muscles and skills, Dash Decker there’s a reason he’s called ‘The Chosen One’, and Chase Lundquist has an aesthetic body like no other. Team Ethan/Jett are adorned in complimentary low-cut camo trunks and socks while Team Dash/Chase come to the ring in singlets that cling to the muscular bodies like saran wrap. When round one begins you can small the testosterone oozing out of the ring. As you would expect the smack talk starts immediately with Team Ethan/Jett loose and confident as Ethan brags he’s beaten both weaker opponents in the past before slapping a high five with his teammate. Team Dash/Chase look more serious in their corner with their sights on making sure that doesn’t happen today. The veterans start off the action in Round 1 with a test of strength that has the bigger Dash gaining the advantage and forcing Ethan into the corner turnbuckle. The Punisher turns things around with a tight leg scissors strapped across The Chosen One’s throat before tagging his partner Jett into the ring. Jett’s big muscles vigorously score with a leg drop on Dash’s abs and follows up with a super tight camel clutch and massive bicep flex for the fans. Dash is able to power out and crawls to his corner tagging in his partner. Chase quickly changes the high-paced momentum with a perfect rear choke while lacing Jett’s hairy legs in total control. The momentum shifts back and forth between the two teams with exhilarating non-stop action through all three rounds and a 30-minute marathon. Which team has the right fight plan to claim victory and which team will be left lifeless and defeated? This is likely the best tag team match ever to come out of 88W!