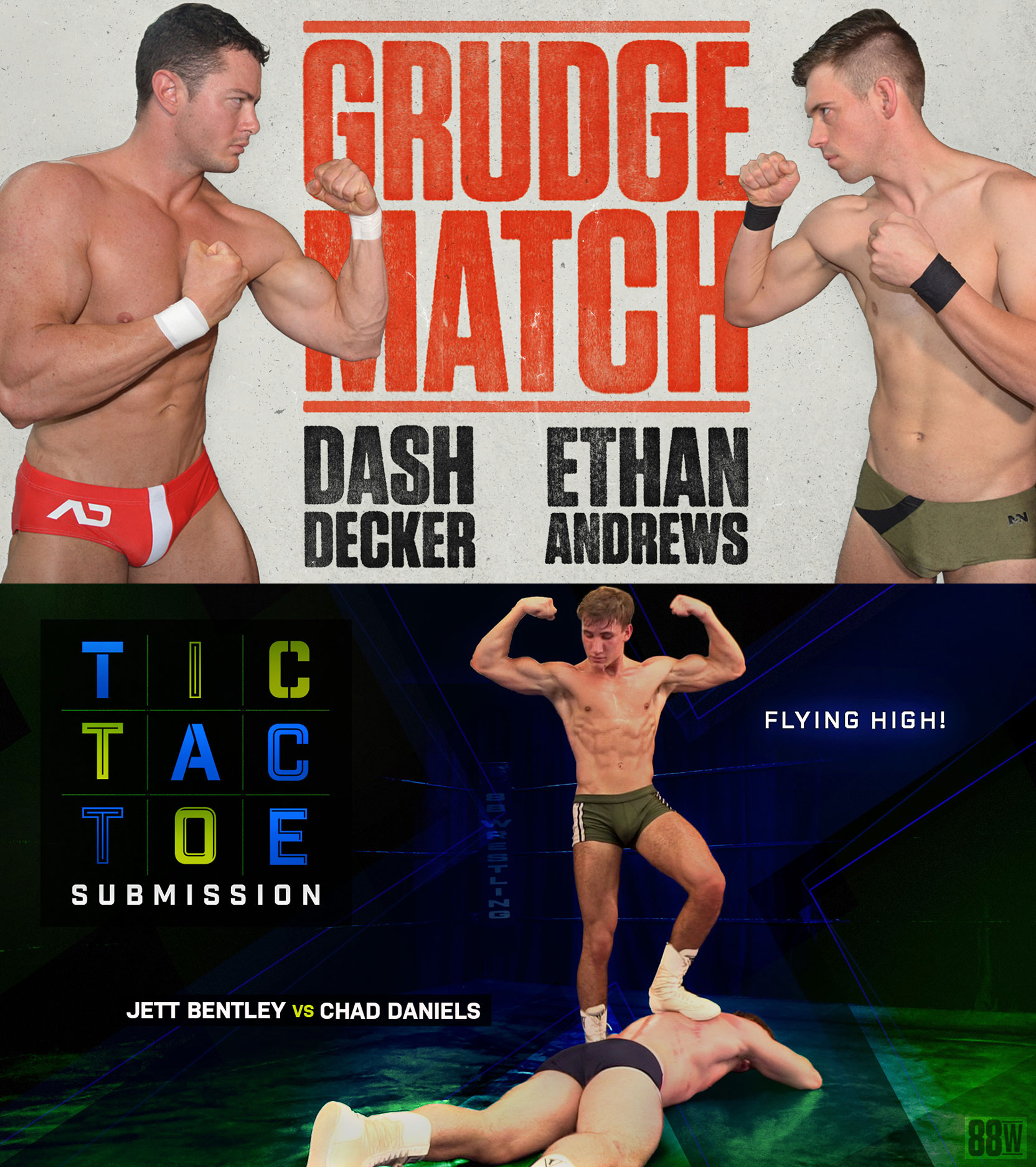 This grudge has been brewing forever, so who knows what to expect! Dash Decker heard the call outs from Ethan Andrews this summer and rants in one of his own call outs right before the match gets started. Both of these megastars have their site on the KOTR belt, and both know that the other is a major obstacle in climbing to the top of the mountain. Dash looks spectacular in red speedos and white boots, while Ethan’s hot bod shines in olive green speedos and black boots. As they circle the square in anticipation of what’s ahead, they engage in some friendly banter, both knowing each other so well they realize it’s going to take more than head games to win this bout. They lock up and the Destroyer takes the early control with a reverse headlock that exposes the Chosen One’s ripped abs for a ripe beating. Ethan continues with a stinging leg scissors around Dash’s head while sprinkling in a few MMA style holds. This makes the big guy mad and he resorts to a low blow to change the momentum.  Dash strategically moves to a power attack to maintain his control, suffocating Ethan with a relentless series of painful. As you watch these combatants sweat and struggle to gain the upper hand oddly enough there’s a twisted love story evolving that goes from bad blood to what could be a budding bromance?!  The must-see action started friendly but ends with both wrestlers employing dirty tactics and anything else that is needed to claim victory. In the biggest grudge match of the year, one warrior secures victory with a shocking submission hold that leaves his nemesis groveling on the mat while he proudly flexes in triumph.

Jett Bentley comes into this match with a chip on his shoulder. Like most of the young rookies, he thought he was going to walk right in and make an immediate impact when he joined 88W. He’s made a huge impact with the fans, but he has yet to chalk up a win. The grind began when he was matched up against a few of the biggest studs on the roster in his early matches. Stepping into the ring with Rex and Ethan isn’t easy for any of the wrestlers on the roster, yet alone a rookie new to the fed. In this match, he goes up against big, blond Chad Daniels who outweighs him by 30 pounds! The match is a Tic Tac Toe match, which should be a little bit of an equalizer for Jett because there’s a plan to victory already mapped out for him. Get three submissions in a row and he’ll raise his arm in victory. Chad brings the board to the ring, explains the rules to Jett and the action begins. Jett and his spectacular ripped physique appear to be very confident, and somewhat cocky, when the action begins. And it pays off as Jett quickly takes control of his bigger opponent with a full nelson then tosses him to the mat to place him in a suffering stretch hold. There’s tons of back and forth action with the sweat dripping off both athlete’s impressive bodies. Chad powering out of moves to reverse the action and Jett brings some street fighting tactics to his strategy to bring down the maverick. Does Jett fly high and claim victory, or will the bigger Chad ground the aesthetic gym freak in a blaze of flames?