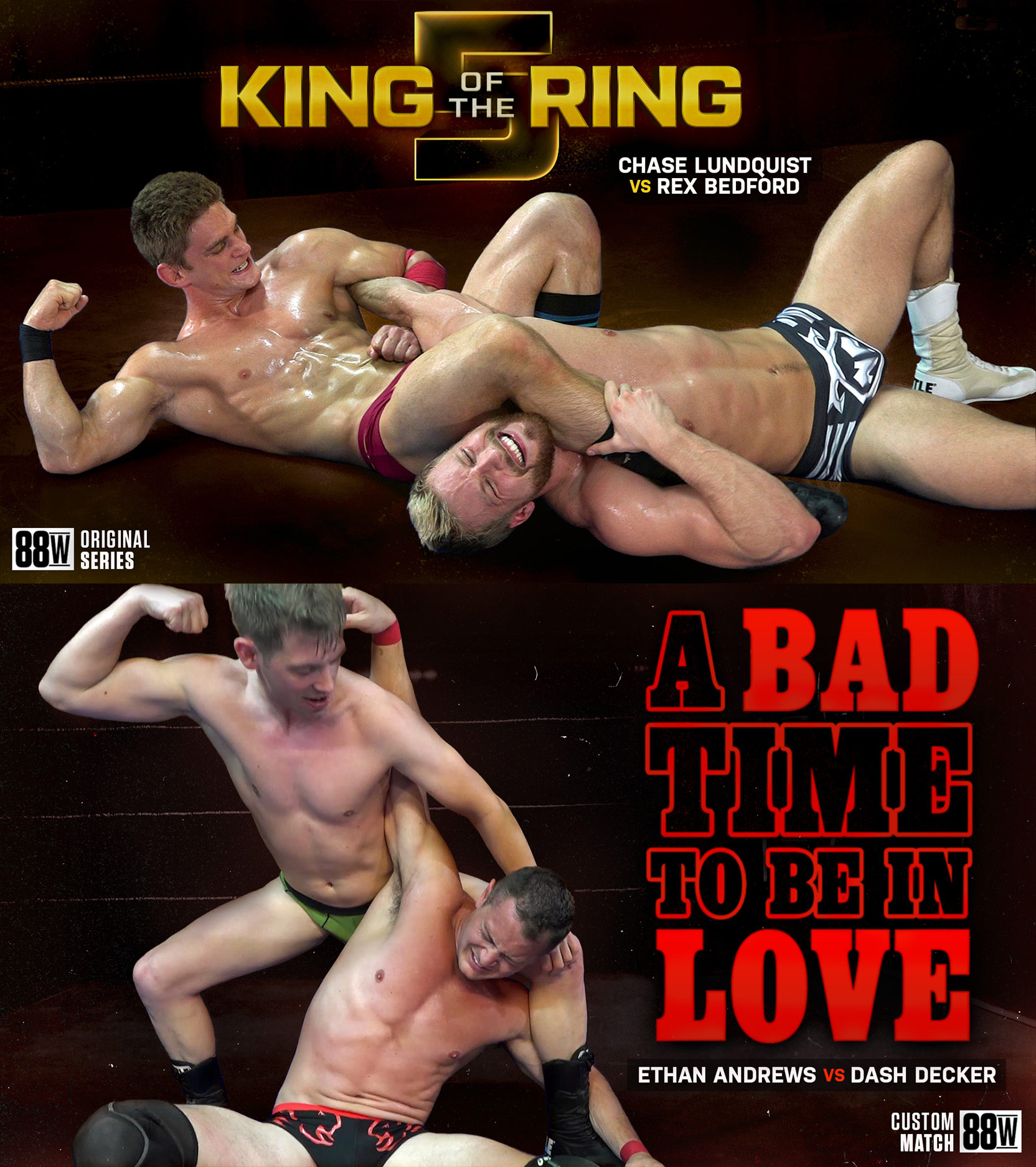 Wow! You have been looking forward to this match! It’s the 5th installment in 88W’s Original Series King of the Ring. It doesn’t get much better than watching these two studs in a ring battling for the belt as their spectacular muscles become drenched in sweat. On one side is the reigning king Rex Bedford, a prolific cage fighter and wrestler who won the title back in KOTR 2 as that match against Ethan came down to the wire to crown the winner. In KOTR 3, Jett stepped into the ring in an attempt to claim the belt, but when the action started to go wrong his buddy stepped in and the action went wild. Rex took a hefty beating but he hung onto the belt because of a disqualification. Next up was the bigger Dash in KOTR 4. Well, with Rex still reeling from what happened against Jett and Cody, the reigning champ was locked and loaded for this title defense. Dash really didn’t have a chance in this one. Which brings us to today. Chase Lundquist stands in the ring sporting a grey and white speedo that amplifies his fine aesthetic fitness body. Every muscle defined and popping out of his gear. Rex climbs confidently into the ring in his signature burgundy speedo and of course, the belt draped over his own brilliant built body. The two exchange some small talk before Rex shows he’s here to take care of business by smashing the belt into his opponent’s face. Chase is able to recover and then starts out a little cocky, even a little nasty but can he finish this way? This championship bout goes the distance and ends with a tantalizing big finish you won’t want to miss!

This rivalry has taken some weird twists and turns since their first match-up in what was billed as a Grudge Match in Catalog 4. That match may have started as a grudge but it sure didn’t end that way. What once was a grudge has morphed into a budding bizarre bromance. Each of these athletes takes pride in their skills and strength, and both have the mentality that they are never going to lose when they step into a ring. Guess that’s what makes this one of the hottest rivalries in underground wrestling today! Ethan Andrews has been looking forward to this day for a while now, but when he arrives at the restaurant expecting his ‘date night’ he instead becomes steaming mad! Dash Decker is a no show! Ethan heads over to the gym to find out what happened. Dash claims he has other ideas, and before you know it Ethan changes into his gear and enters the ring to release some steam. The bromance boys lock up and Dash quickly delivers a bitch slap that stings Ethan. Symbolic or coincidence? Unfortunately for Dash it only escalates Ethan’s temper to another level. For the next 8 minutes Ethan rips his big boy apart, muscle by muscle and limb by limb. He tosses him around the ring at will before forcing Dash into a nasty painful submission, proving to Dash who’s the bitch now! As the 1974 hit song from Grand Funk Railroad goes, for these two studs perhaps it’s a bad time for being in this bromance? During this 31 minute story, will the Punisher continue the torture and domination the rest of the way, or can the Chosen One dig deep to avoid that promised ‘date night’?