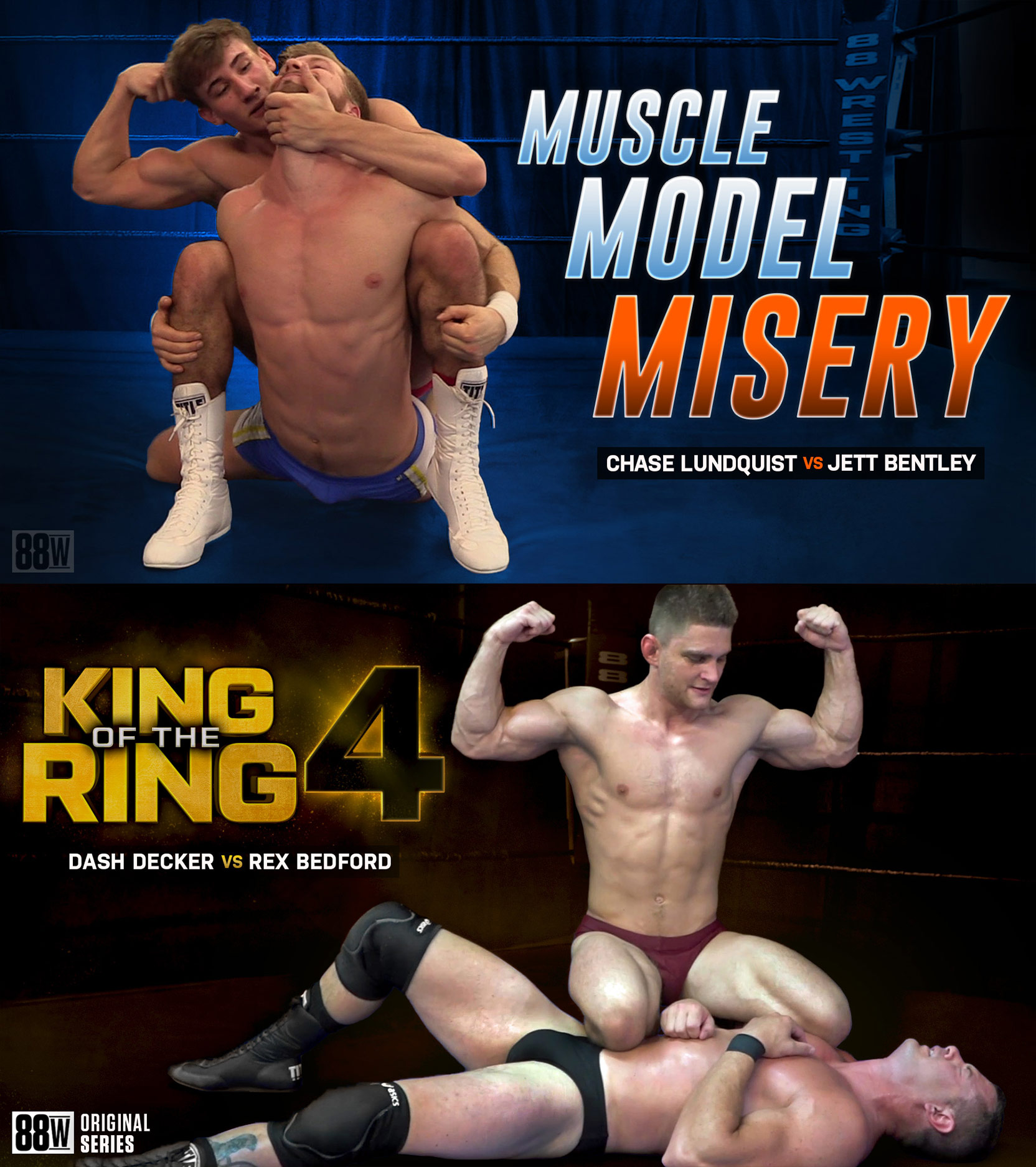 This match seems like if someone set up a wrestling ring in the middle of a modeling agency. I mean, both of these guys have spectacular bodies along with incredible good looks! You won’t find two better built wrestlers with this type of male gorgeousness anywhere in the underground wrestling scene, except for here! Can you just imagine being at a swimwear fashion show and watching these two studs strut their stuff down the runway? Pure heaven! You fans have been asking for this match for a while now, and here it is! Blond hunk Chase Lundquist has been doing his best to make a run at the KOTR belt, while shredded and steady Jett continues to make improvements to better his win percentage. Both wrestlers think they have the best ripped abs on the planet, and who can you argue that? The underwear model target’s Jett Bentley’s luscious shredded abs throughout the match, as Jett stays on the attack of the blond model’s powerful back. Chase gains the early lead with a double leg boston crab, a crashing backbreaker, and some rope punishment on the gym freak’s mouth-watering aesthetic physique. That is, until Jett strikes back with a smothering head scissors and a sadistic surfboard through the ropes. Both wrestlers aren’t afraid to flex and show-off their incredible money-making muscles throughout the entire match. This contest is in question until the late stages with the victor giving the final model flex for the audience and worshiping his own biceps!

There are two matches from this past year that will shape the tone and the outcome of this match, one for each of these superstars. For Dash Decker, it’s his last match with Rex which occurred back in May in Catalog 5. In this match, Rex Bedford declared Dash hadn’t earned the opportunity to wrestle for the KOTR belt, but he was willing to offer a chance to for Dash to show that he deserves a shot. And Dash did just that! The match was spectacular and went the distance, with Dash relying on his brute strength to overpower Rex and claim an upset victory! For Rex, it is his recent KOTR match against Jett which occurred in Catalog 6 back in November. That match had a huge impact on Rex’s psyche! He was humming along to a solid and steady defense of his belt when something went terribly wrong. Rex never anticipated that Jett’s buddy Cody would enter the ring during a championship match and come to his buddy’s aid. But in fact, that’s exactly what happened! When Jett and Cody double-teamed Rex in the second round they beat the shit out of him. Rex was laid out like a rookie from that beating but, fortunately, the miscalculation didn’t cost him the belt because Jett was disqualified as a result of Cody entering the ring. Now, here we are today with two wrestlers who should have two different states of mind. Dash should be feeling pretty good about a triumph in his second chance at the belt, and you have to wonder if Rex has mentally recovered in time for his defense of the belt. Can Dash do it again and quench his thirst in pursuit of claiming the King of the Ring belt? Or will Rex adjust his strategy and maintain his lengthy reign as King? Don’t miss this spectacular event! It’s our Match of the Year!