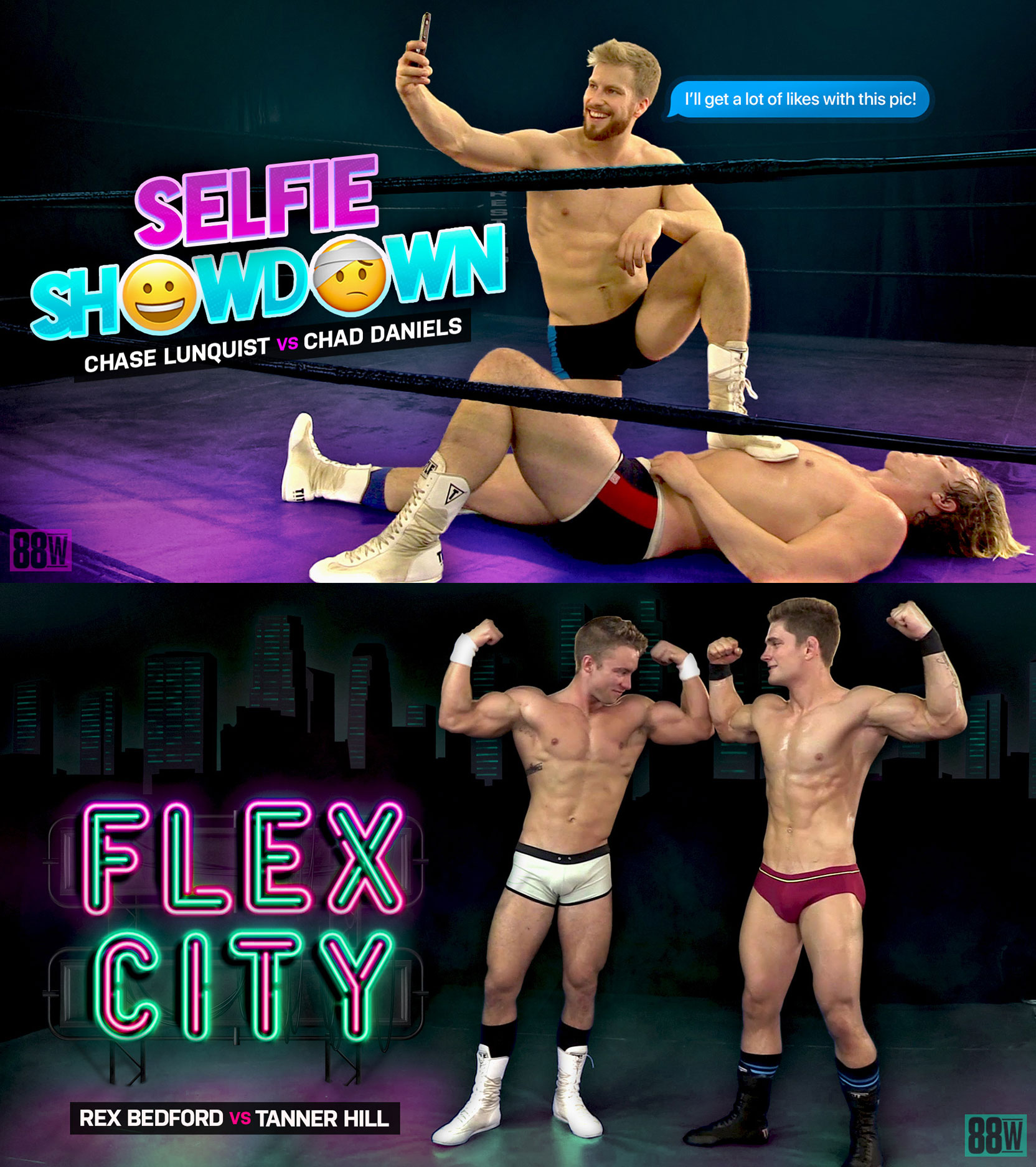 Both of these guys know their way around a camera, both in front of it and behind. Chase Lundquist’s modeling career has exploded this past year, while Chad Daniels’ graced the cover of many romance novels over the last several years. So what do you get when they both step into the same ring, of course a selfie showdown! The two blond bombers don’t waste any time trying to out-selfie each other. Chad’s confident he takes the best selfie, while Chase quietly snaps away while showing off his magnificent body. Plenty of trash talking abounds in this match, and as a bonus we’re treated to a flex-off before the wrestling action gets started. Chase goes on the attack first, connecting with a spectacular drop kick then quickly controls Chad with a leg lock. He taunts Chad flexing his big bicep in his face and doesn’t stop there. Chase enjoys working over Chad’s abs in the corner then continues with suplex, a standing bow and arrow, and then an uncomfortable camel. But Chad doesn’t take it much longer and turns the tables on Chase. He uses his bigger size to his advantage and begins overpowering Chase’s ripped bod. As the match unfolds the sweat starts to pour off their intoxicating muscles. In the end, only one of these stunning models snaps the ultimate selfie and takes the victory!

The 88W roster is filled with real, hard muscle. Not wannabe muscle, not fake muscle, but 100% first-rate muscle. And the two wrestlers who climb into the ring today epitomize perfect muscle specimens. The smaller Rex Bedford has a kind of tough muscle, earned by never-ending training sessions and pushing the limits of what his body is capable of doing. Tanner Hill, a little bigger, makes his gains pumping iron day after day in a quest for that perfect body. Looking at his outstanding, symmetrical physique you’d swear he just stepped off stage with the 1st place trophy. So it’s no coincidence before the wrestling begins there’s a sexy muscle pose off in the center of the ring between these two studs. It’s a personal preference as to who you think wins the flex off, but by the end of this match you’ll see a conclusive winner! Rex takes charge first stretching Tanner out with a variation of a bow and arrow, and sure enough as the blond muscle hunk suffers Rex flexes his beautiful bicep. Tanner retaliates with a back-breaking boston crab on the MMA fighter while flexing and showing off his powerful pecs in the process. As the action goes back and forth throughout the match, both guys get into showing off their stunning bodies while the opponent is suffering in despair. The sweat that drips off their bodies helps highlight their imposing physiques. You’ll want to see the ultimate ending which settles who’s the macho man today, and who rules Flex City tomorrow!