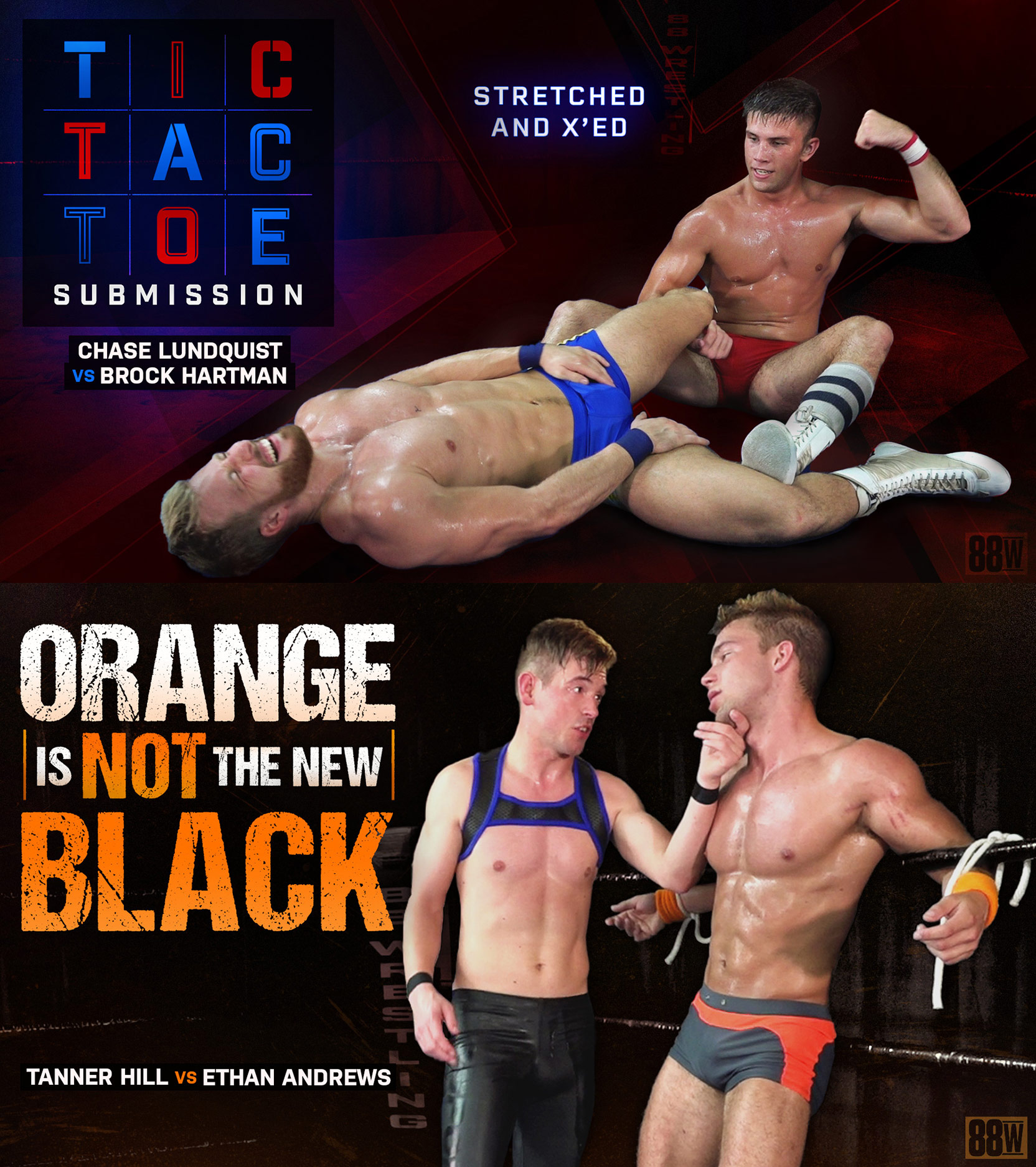 Chase Lundquist confidently climbs into the ring and asks his opponent ‘are you ready to get your ass kicked again?’ For those of you who watched the spectacle that occurred during the Tanner Hill & Chase Lundquist vs Dash Decker & Brock Hartman tag team match know exactly what Chase is referring to! Tanner & Chase outsmarted and outmuscled the two big boys and believe me they haven’t forgotten. The bearded blond stud understands he’s going up against one big boy so he figures he’ll work the odds to his favor and proposes the match to be a tic tac toe contest. Brock Hartman isn’t bothered since he’s geared up and ready to deliver some payback, so he agrees to the deal. The first wrestler to claim 3 X’s in a row wins. The action in this match is jam-packed with brilliant bodies being stretched, marvelous muscles being flexed, and impressive holds like an ab claw, a crucifix, strangleholds, surfboards, and a dazzling sleeper. Brock has the brawn, but does he have the brains to outsmart the blond underwear model in a captivating game of tic tac toe?! You’ll love all the hot sweaty action and be surprised by the amazing outcome!

Tanner Hill enters this match on a pretty good roll winning his last 3 matches and on his way to a 4th consecutive win until he got ‘Ambushed’ in his match against Brock. He had the big boy on the brink of defeat before Brock’s tag team partner Dash interfered double-teamed him to help Brock chalk up his first victory. On the other side of the ring, Ethan Andrews is steaming mad and pissed about what happened in his last two matches. He came within a whisker of winning the King of the Ring belt, and then got double teamed and thrown out of the ring in his 3-way match. He’s now on a search and destroy mission for anyone that gets in his way. This ought to be very interesting! Ethan gains the early advantage by driving Tanner into the mat and then proceeds to punish him. He connects with several stomps to the muscleboy’s sixpack and continues by placing his black boot across Tanner’s throat. Ethan asks if he wants to give up within the first two minutes but Tanner won’t comply. Perhaps he should! Ethan dishes out a powerful punishment applying every vicious hold he knows. Tanner shows a few brief flashes of fighting back but this is a total muscleboy beatdown. This match could have been titled with the lyrics from the 1968 Zombies song,’ What’s your name? Who’s your daddy?’. It didn’t matter who the opponent was today, Ethan was intent on showing the 88W world it hasn’t heard the last from him! Watch out Rex!