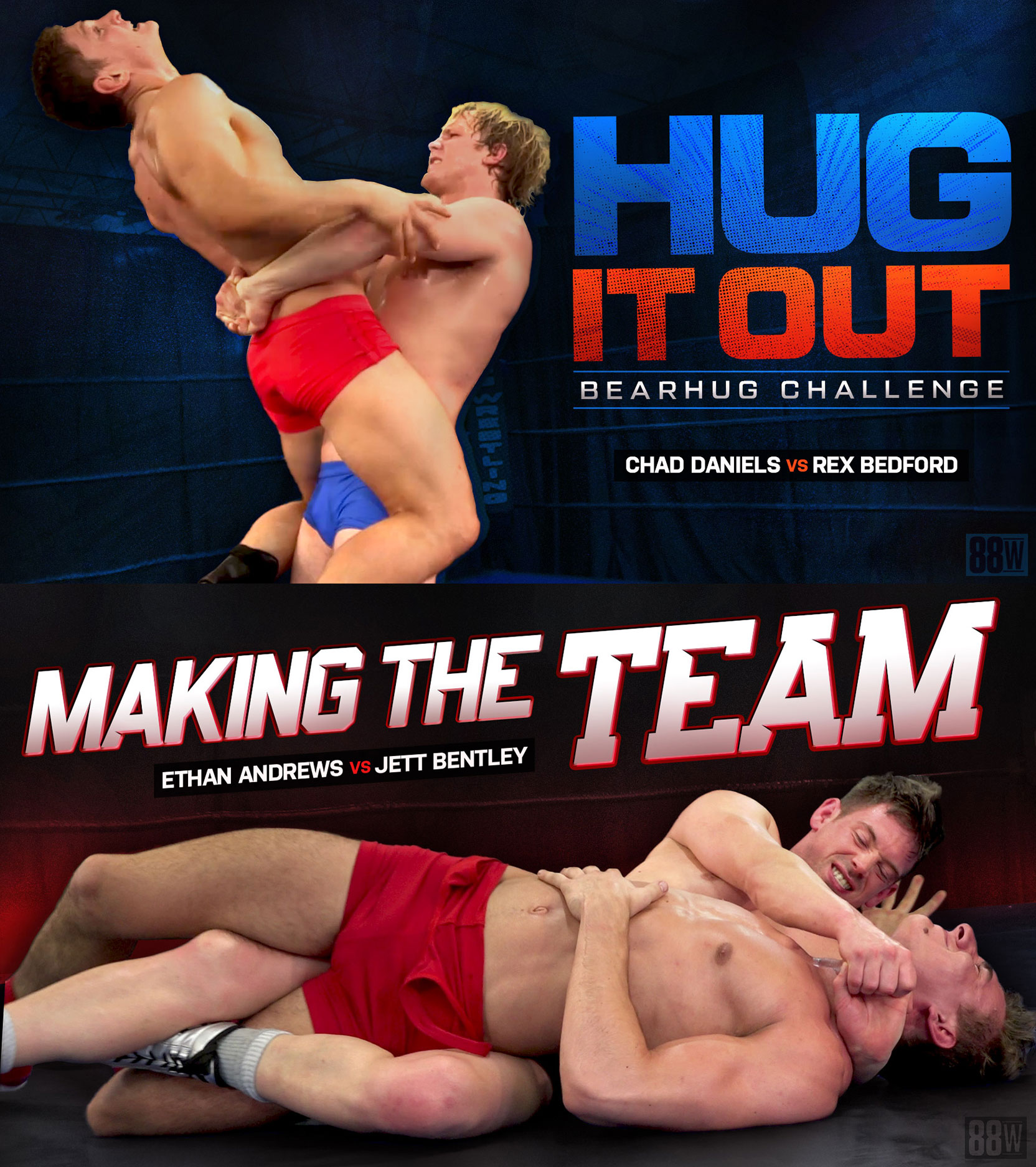 This match is much more than a big vs small match! This match evolves into a brutal bearhug battle and the winner is decided when he viciously squeezes 3 bearhug submissions from his opponent. Chad Daniels enters the match still sore from his encounter with The Prince of Darkness and after his wild 3-way ring action against Chase and Jett. He’s hungry for a win and is out to prove his worth on the roster. Rex Bedford has been an instant sensation and fan favorite since emerging at 88W with his vast combat sports skill set and a new sky-high confidence. He’s done well in his matches against the rookies but had his hands full with the established destroyer Ethan. He’s eager to cut this big blond bomber down to size as he sets his sights on more lofty goals! Rex takes control of the maverick early by besting him in a test of strength, then follows with; a hammering clothesline, a leg drop to the big boy’s abs, a painful camel clutch, and a stretching surfboard which has Chad crying out in pain. But Chad shows some real resilience and turns the tables on the smaller Rex. He slows down the speedy stud with a double leg takedown, tightly scissors his huge thighs around the stud’s trim waist, then for good measure he repays him with a bone-rattling clothesline of his own before capturing Rex in a back-breaking bearhug. If you like cruel and unusual bearhugs and a lot of hard muscle flexing you’re going to want to watch this thriller!

If you were a wrestler in school you probably remember the anxiety of wrestle-offs to make the varsity team. And if you weren’t a wrestler, you’ve probably fantasized about the excitement of competing against a stud for that final spot on the roster. Two hot hunks have their eye on the last roster spot for the varsity dual meet this weekend and neither of them intends on losing! The excitement is high in the gym today as both wrestlers go through final preparations. The much more experienced Ethan Andrews is decked out in a silver and grey singlet that compliment his trendy silver wrestling shoes, while rookie Jett Bentley’s ripped bod looks good in his red singlet and glossy red shoes. Street punk Ethan has been on a terror lately, punishing and destroying every hot muscle boy he’s encountered at 88W to date, and is totally confident his bulging biceps can help do the same to this teen marvel. Jett’s aesthetic muscled body exudes certainty that he’s going to come out on top and cut the over-hyped street punk down to size. As the whistle blows, the action immediately turns intense with Ethan scoring first with a single leg takedown. He transitions that into a tight leg lock, but Jett quickly escapes and goes for a double leg takedown. It isn’t long before the straps are pulled down and expose both wrestler’s glorious fierce bodies and the action moves to the mat. While the intensity continues to race higher and the sweat begins to build, one of the wrestlers starts to gain the upper hand. All the passionate action leads up to scorching finish, with the winner flexing his pumped sweaty muscles while roused and elated to be making the varsity team!