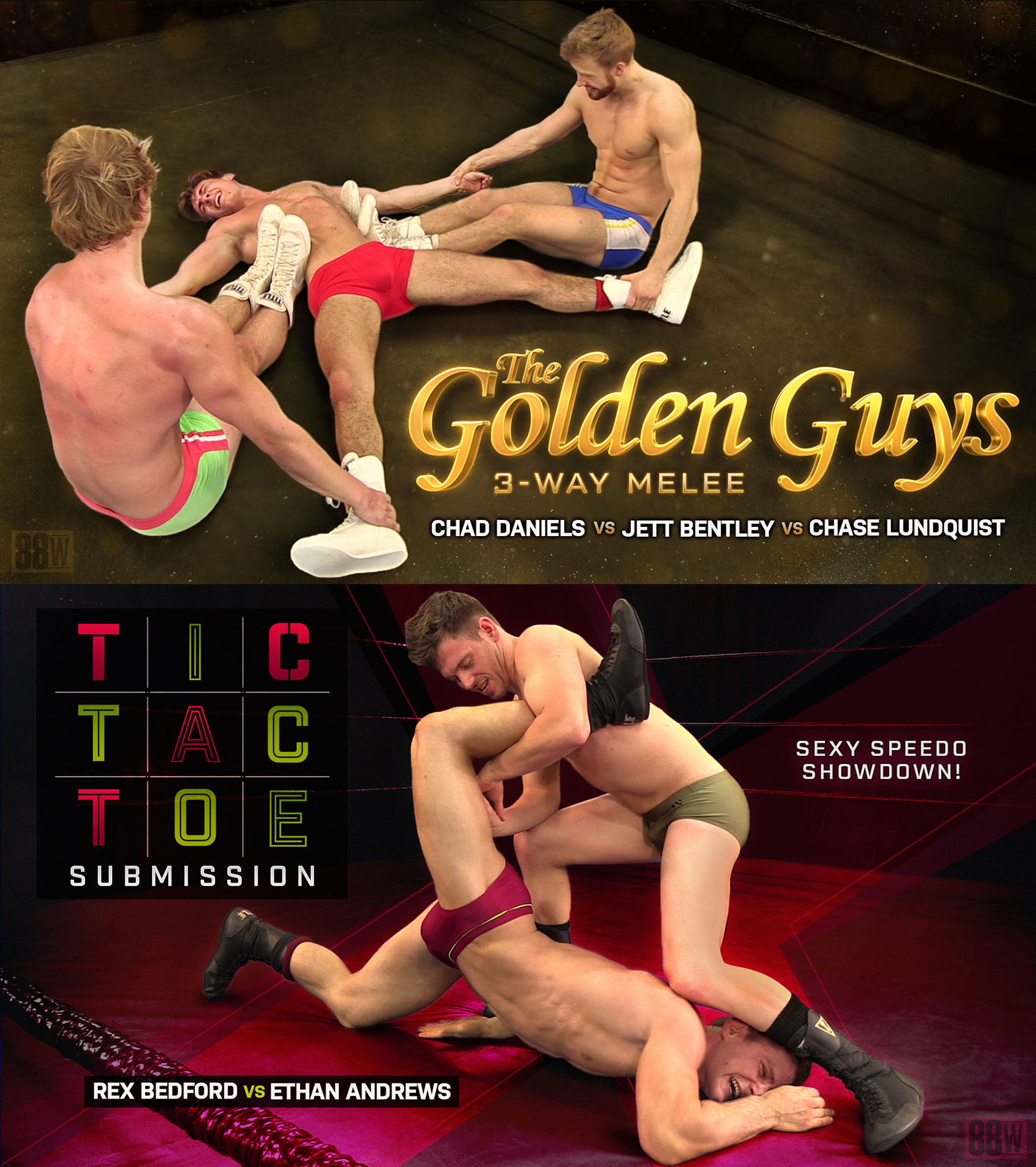 This trio of hot, blond hunks climb into the ring and nobody really knows what to expect! The last time we saw Chad Daniels he was getting the shit beat out of him by street punk Ethan, the last time we saw Jett Bentley was in his rookie debut against Rex clad in camo where he held his own and put up a good fight, and the last time we saw Chase Lundquist he was on the receiving end of a brutal ab bashing from muscle boy destroyer Ethan. All three of these guys are hungry for a win, the question is which one will follow the right strategy to claim victory?  Round one begins with each wrestler sizing up the others and also with a little uncertainty as to how to approach this match. This 3-way match is a new experience for all of them! At the onset, it’s an every man for themselves mentality with the bigger Chad scooping up the smaller rookie Jett and power slamming him to the mat. Not be outdone, Chase swoops in and applies a painful, tight boston crab on the rookie. But all this doesn’t faze Jett as he climbs to his feet and goes after both opponents, then next thing you know Jett and Chase are double teaming Chad! The non-stop fighting continues this way through the middle of the first round, that is until two of the wrestlers strategize to make it their mission to double team their lone opponent until he’s beaten and battered, then tossed from the ring. Who will be the last man standing in this unpredictable free-for-all brawl? Will it be the brawny maverick Chad, the rookie Jett and his stellar shredded physique, or Chase with his incredible greek god aesthetics? Only one will claim sweet victory!

The wrestling gods have smiled on us today with this 35-minute marathon gem of a matchup! Rex Bedford vs Ethan Andrews, two of the most outstanding wrestlers in the business so it doesn’t get much better than this! Both of these guys have their eyes set on a destination that includes a shot at teen muscle phenom Tito and his King of the Ring Belt. This match could go a long way in determining which of these warriors arrives at that destination first. Rex is pound for pound one of the strongest and toughest wrestlers on the roster, and when you add his MMA skills to the resume he’s very difficult to beat. Ethan demonstrates an uncanny ability to take out almost any opponent with his endless arsenal of holds, and has proven himself to be a muscle boy destroyer. Both guys are decked out in sexy speedos and black boots while Rex describes the terms of this encounter. Essentially, whoever wins 3 ‘X’s’ in a row extinguishes his opponent. The action gets off to a fierce start and never slows down. The sweat builds then drips from their racy bodies as nearly every hold imaginable is applied on their opponent. All the thrilling, intriguing, non-stop action comes to a stunning ending that has you wanting even more! Will clever cage fighter Rex be able to out-think and out-maneuver sinister street punk Ethan in a pivotal game of Tic Tac Toe Submission?