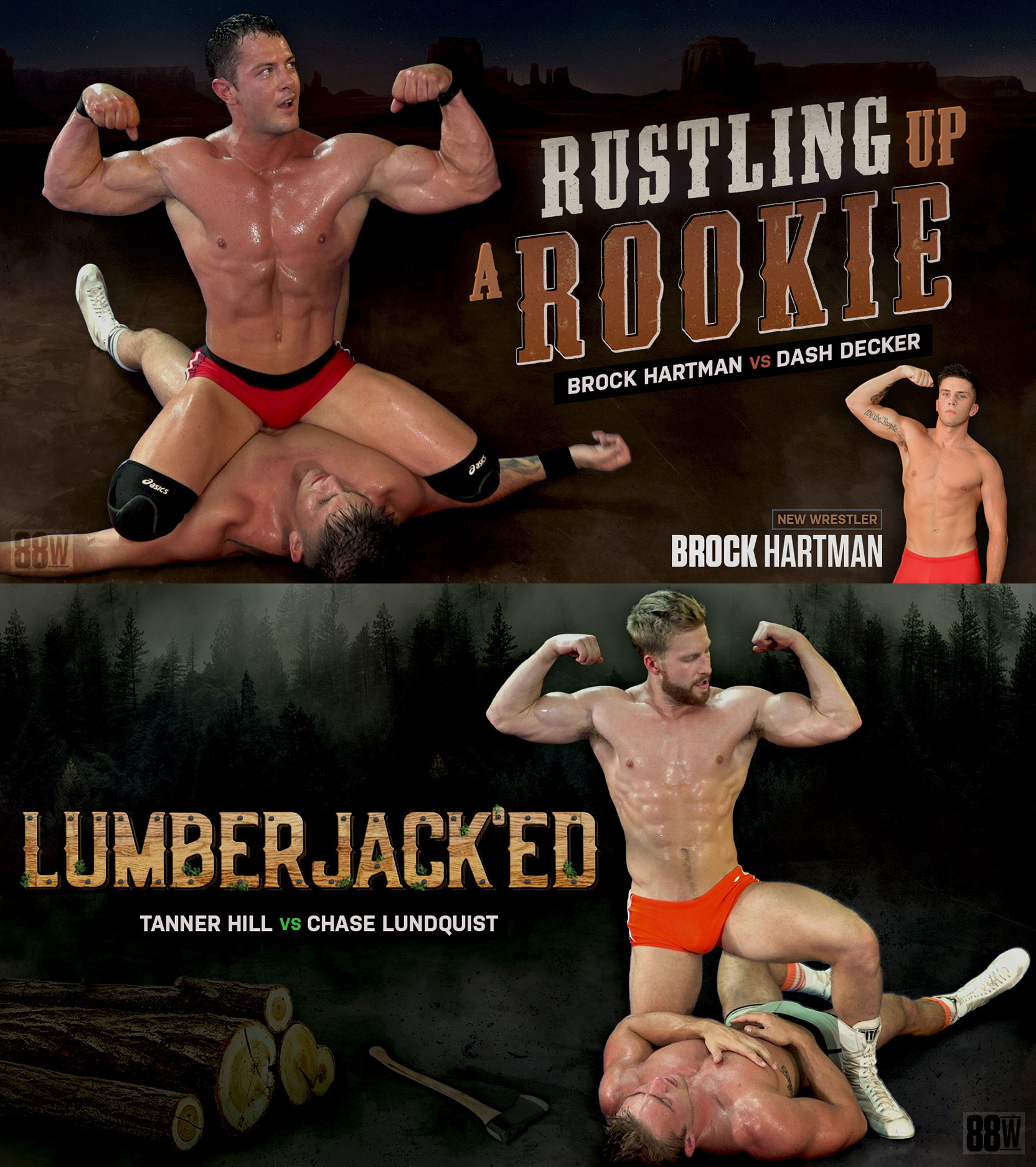 Dash Decker has been an instant superstar since he stepped into the underground wrestling scene. He’s got it all, the muscles, the looks, the charisma, and the attitude. He’s risen to the top of the roster here at 88W, and has been to the top of the mountain in the past.  It’s no wonder he’s known as ‘The Chosen One’. But beyond his wresting persona, he’s a Midwestern country boy at heart. He grew up in rural small towns, and has also spent some time on the farm. In this match, he allows those cowboy characteristics to shine. Brock Hartman is an impressive titanic specimen. He’s 6’2” and 210 lbs with a huge physical presence, this guy is one big dude! In the ring today is over 400 lbs of mass and muscle! Dash is used to being the biggest guy on the roster but not anymore, Brock has arrived and he means business! He’s a no-nonsense guy who joined the roster to test own skills. The rookie arrives in the ring first and his presence is immediately felt. We all know Dash is no rookie and he has something up his sleeve to start the mind games. The Chosen One struts out of the locker room and into the ring decked out in his hometown cowboy garb. Now this doesn’t faze Brock, but maybe Dash’s superior experience will. The two hulks circle one another and size each other up before The Chosen One kicks off the action with a boot to the abs of the rookie but he just shakes it off like it never happened. Dash follows up with a grinding headlock and then rustles Brock into the corner and begins an attack on his impressive pecs and abs. Dash whips the big dude across the ring and continues his attack, but this time Brock pulls a bold move and snatches Dash’s cowboy hat! Can the bigger Brock out duel the cowboy in his own corral? Or will Dash send the baby calf off to slaughter? All the intriguing action ends with a breathtaking finisher!

This is a special edition match between two sexy, blonde muscle studs that have spent countless hours perfecting their super hot bodies. Tanner Hill lives in the gym lifting lots of weights on a mission to build the perfect muscled body. His physique leans more toward the bodybuilder look, and this fitness fanatic is not shy about flexing his beautiful bulging muscles. On the other side of the ring, Chase Lundquist works on his exceptional body using a variety of workouts both indoors and outdoors. His award-winning physique leans more toward the aesthetic fitness look, showing off off his ripped abs, perfect pecs, and impressive arms all wrapped up in one superb symmetrical physique. The underwear model has also been known to spend time working out in the woods to hone his picture perfect body. Tanner stands in his corner not knowing what to expect with this match, and when he sees Chase entering the ring in his lumberjack attire he’s amused and is not sure what to think. But when Chase shows off his axe and peels off his flannel shirt anybody watching is treated to seeing his stunning hot body. The two blond studs exchange some pleasantries at the beginning, and then get right to deciding who’s going to be chopped down to size. There’s tons of give and take action, sweaty muscles flexing, and hot bodies suffering in all three rounds of this exceptional match. In the end, one of the hot studs gets cut and chopped then has the axe shoved down his trunks in defeat!