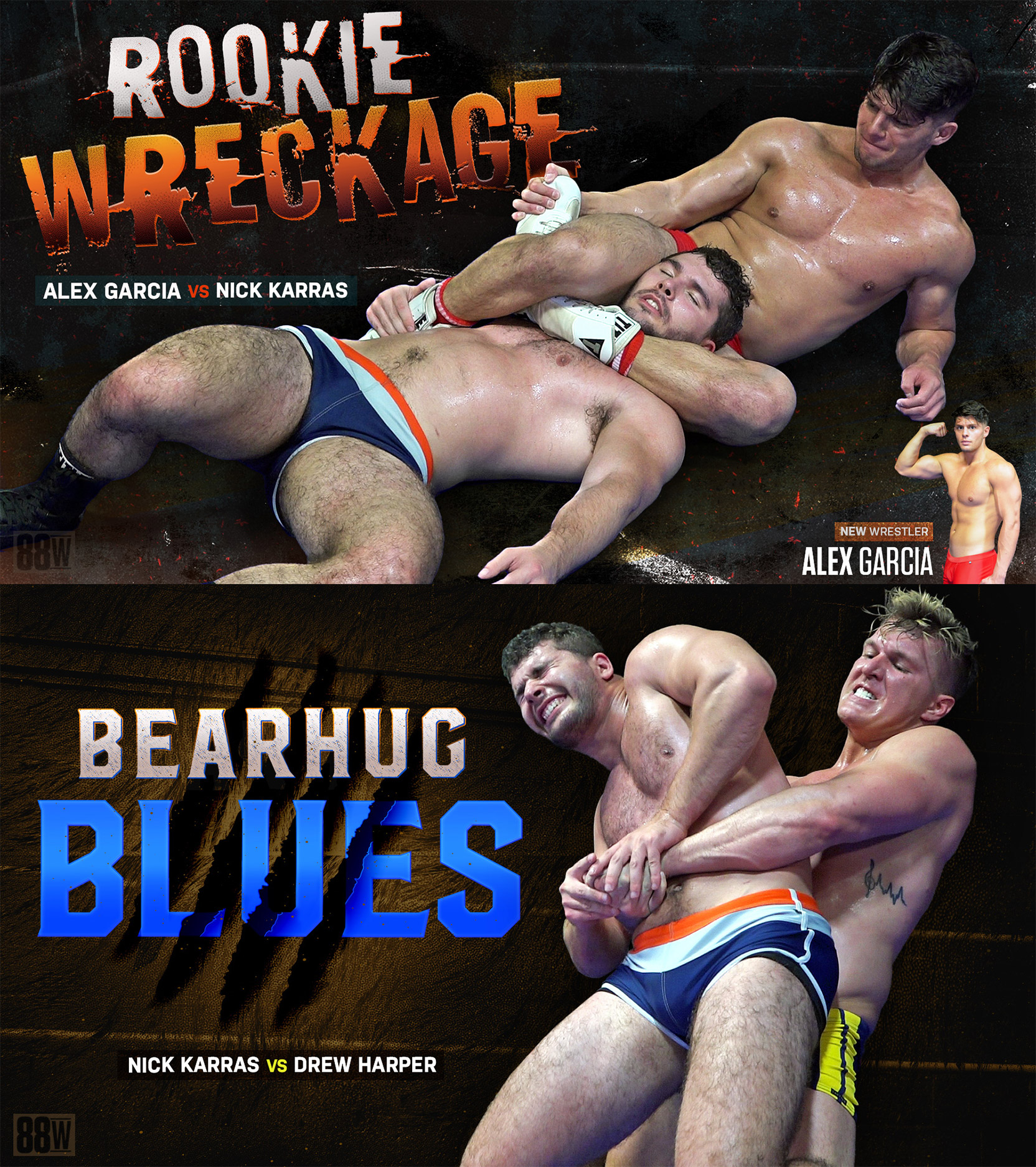 Two Matches on One DVD
Availability:   Ships in 2-3 business days.

Teen Sensation Alex Garcia makes his exclusive debut at 88W today! He’s had his eye on the impressive 88Wrestling roster for a while now, intent on challenging every skilled, aesthetic muscleboy he’s heard all about from the underground scene. He steps into the ring with a list of imposing credentials, including an amateur wrestling background, an incredible teen muscle bod, and a tough ju-jitsu skill set. This kid has it all, the total package, and he’s not afraid to take on anyone! In his debut, he’s going up against another amateur wrestler who won the state title not too long ago in Nick Karras. Nick knows his way around the mats and has been able to transfer his size, bulk, and skills to the 88W ring. He’s had some success in his early matches and can’t wait to get his shot at this teen rookie. In his mind he’s confident and is already chalking this matchup as a ‘W’. The guys size each other up in their corners before coming to the center of the ring to tie up beginning the action. Nick is the aggressor and scores first with a slick single leg takedown and several body blows which catches the rookie by surprise. Alex fends off Nick with an escape and a duck under takedown taking Nick to the mat. Nick is able to get to his feet and then catches the rookie in painful stretching spladle. It’s a fast and furious pace from the start causing both hot bods to build a sheen of sweat on their muscles. No doubt both of these guys want to score the ‘W’ today. The swift pace and back and forth action continues for all 3 rounds until the victor flexes his sweaty muscles while the loser is soundly beaten and defeated. Will it be one hell of a debut match for the gifted rookie or will Nick knock him down to size?

Two weeks ago Nick Karras faced off against the new rookie Alex and was stunned by the outcome. Today he steps into the ring to take on what will be even more of a challenge in a bigger veteran that’s been around the underground scene for several years. Drew Harper has more ring experience and has a substantial 25 pound weight advantage on Nick. This could spell trouble for Nick at a time when he desperately needs to chalk up a win. Both big boys come to center ring, tie up, and Drew scores first with a speedy headlock and hip toss that drives Nick down to the mat. Drew mounts him and begins bashing the bulldog’s abs, then places him in a figure four head lock and starts banging Nick’s head into the mat. Nick counters with a single leg takedown, a double arm bar, and then locks on a rear naked choke. Drew powers out and counters with a standing full nelson stretching the shorter Nick. The big boys begin to get lathered up while the action continues to heat up through all 3 rounds. A lot of the amazing action is on the mat, but when it comes to submissions the victim is squeezed and crunched in attempt to crack his ribs before he submits. Every hard fought riveting round ends by a painful rib crushing bearhug submission in this big boy brawl. Can Nick turn the tables and squeeze a victory out of Drew, or will the bigger powerhouse leverage his size advantage to crush the bulldog’s ribs into an excruciating final submission?